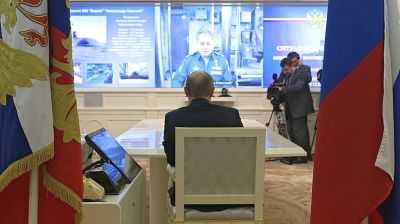 It’s easy to see how an intelligent ex-KGB officer is automatically transformed into a suave, deadly version of Dr Evil in the popular imagination abroad. / Photo: CC
By Natalia Antonova in Moscow May 15, 2017

In recent years, Russian President Vladimir Putin has emerged as the great antagonist of the West – whether for meddling in Western elections, grabbing Crimea, starting an undeclared war in east Ukraine, or supporting the murderous Syrian dictator Bashar al-Assad – but the Western view of him is often very contradictory, especially right now.

On the one hand, journalists and pundits want to see Putin’s government as perpetually on the brink of collapse. After all, Putin is seen as ruling Russia with an iron fist. He oppresses his own people, and even if his popularity ratings don’t reflect that, the people are bound to catch on eventually. The spectre of the Russian Revolution – which turns one hundred years old later this year – is vivid in the Western imagination. Just like doomsday preachers calling on people to repent because the Rapture is due any day now, we eagerly seize on any and all signs that Putin’s government is beginning to crumble.

Yet on the other hand, we’re tempted to cast Putin as an all-powerful supervillain, a guy who can effortlessly compromise a future US president, a guy capable of “weaponizing” refugees in order to destroy Europe – among his many other evil genius moves.

Which version of Putin is real? Certainly both versions have some truth to them. A government whose chief authority rests on the shoulders of one man is by nature fragile. Not to mention the fact that as a recent poll revealed, only 48% of Russians say they intend to vote for the man in 2018. At the same time, the same poll revealed that only 22% of Russians would like someone other than Putin to win. In conjunction with Putin’s high approval rating, it has become obvious that support among Russians for Putin is more passive than active. The majority have no problem with saying they approve of their president, but physically checking his name off on the ballot means taking approval to a different level, and is thus a different matter.

On the other hand, Putin is certainly capable of exploiting problems in the United States and the EU – and even better at terrorising Russia’s neighbours – and then turning around and using these crises to raise Russia’s prestige with his domestic audience. This in conjunction with Putin’s ability to throw sizeable enough crumbs to the general population during Russia’s oil boom has for years been a winning strategy. Perhaps it doesn’t take genius, but it certainly takes intelligence. And it’s therefore easy to see how an intelligent ex-KGB officer is automatically transformed into a suave, deadly version of Dr Evil in the popular imagination abroad.

Perhaps in order to better understand Putin one should see him through the eyes of his most prominent antagonist, anti-corruption crusader Alexey Navalny.

Navalny doesn’t build up Putin as a mighty Goliath, preferring to speak about him in a sardonic tone. Perhaps more importantly, Navalny has focused his recent protest efforts not on Putin, but on Prime Minister Dmitry Medvedev, a much less popular figure. This chimes with the way that the protest agenda in Russia has been taken over by more localised, less abstract concerns – be they road taxes or a controversial plan to get rid of a sizeable portion of Moscow’s post-war housing.

In many ways, protesters and protest leaders have woken up to the fact that while Putin remains largely unassailable, certain cogs and wheels within the system he presides over are not. Those cogs and wheels are simply of closer proximity to average Russians, who may not care at all about goings on in the Kremlin, but do care if they’re suddenly being taxed too much or if their apartment could suddenly be taken from them.

While outsiders frequently focus on Kremlinology as a kind of “science” that must be learned in order to understand Putin and Russia in general, the truth is, processes that affect daily life in the country are no less – if not more – important. Kremlinology is ultimately to analysis what the Da Vinci Code is to literature – it’s exciting and it certainly attracts an audience, but it’s also shallow. And by frequently privileging Kremlinology over analysis of grassroots movements and other, localised political and social processes in Russia, the foreign media covering Russia has developed a sizeable blind spot.

And it’s not just foreign media either. Consider the case of exiled ex-tycoon Mikhail Khodorkovsky. His Open Russia organization, which he founded from abroad, held anti-Putin protests across Russia at the end of April – but the turnout was dramatically lower than Navalny’s anti-corruption protests that had occurred in March. Obviously, the fact that Khodorkovsky is a former oligarch and thus automatically distrusted by average Russians played a role in this.

But there is another factor that Khodorkovsky, who spent over a decade in jail after making a foe of Putin, may have missed. Putin’s been in power for so long that he’s become both a constant – kind of like the weather, which you can’t do anything about – and an abstraction. Many people are also still bitter about the 2011-2012 anti-Putin demonstrations, which ended up with the protest movement crushed and divided. Both emotionally and practically speaking, Russians are currently more interested in narrower and more achievable causes than driving Putin out.

This isn’t to say that Putin has nothing to worry about. An opposition that’s getting smarter is reason to worry enough – but there is also the fact that Russia generally appears to be at yet another crossroads. The economy has faltered, but the rapaciousness of the local elite still shows no bounds, causing a slow but steady growth of discontent. Even the pet opposition parties present in the State Duma, while craven and discredited, could show their fangs should things get really dire. The euphoria that occurred when Crimea was annexed has passed, and the pendulum of the public mood could swing sharply in the opposite direction. Then there is the obvious fact that while Russia is legally a nation, it still functions closer to that of an empire – with all of the usual problems that empires tend to generate for themselves in the long run.

Taken all together, the political processes that Putin is presiding over right now don’t fit into boxes such as “there will be a new revolution tomorrow” and “Putin will probably try to take over the world before he’s done”. When it comes to possible scenarios, for now it’s best to stick with the boring ones – the slow corrosion of an inflexible political system, Putin’s search for a successor, and so on. Of course, Russian history has been known to move in fits and starts, with plenty of surprises along the way. It’s just that surprises rarely occur exactly where you’re looking for them.

Natalia Antonova is a writer and journalist. She works as associate editor of openDemocracy Russia, co-founded the Anti-Nihilist Institute, and tweets as @NataliaAntonova.