The World Bank on March 10 released a report with the charmingly straightforward title, "What's next in aging Europe?". The product of a large and accomplished group of economists, this one focuses on what is going to happen in the "new" EU members – Poland, the Czech Republic, Slovakia, Slovenia, Bulgaria, Romania, Latvia, Lithuania and Estonia – over the next several decades.

The report, in general, echoes what I’ve been saying about the region almost down to the letter. That’s not because of any special brilliance or erudition on my part, it’s simply because I accurately presented the same summary demographic data that the report’s authors do. This data, despite the shocking frequency with which it is either ignored or misrepresented, is readily available to anyone with an internet connection and a work ethic. You certainly don’t need to be a World Bank economist to look at it and draw the obvious conclusion: the region is in trouble.

For some reason that I just cannot understand, when it comes to demography in Emerging Europe most Western analysts are fond of bizarre counterfactuals. The international business press has fallen over itself to offer the most lavish praise to the “Baltic tigers” or to other successful economic reformers like Poland and Slovakia.

In the past, whenever I have made observations such as “everyone says that Russia is ‘dying’ but its population has actually fallen by a lot less than most other countries in the region”, I got responses like the following: “well Central Europe has actually performed a lot worse than Russia in demographic terms, but just imagine what would have happened if Russia had joined the European Union!” The obvious truth that Russia not only didn’t join the EU but never will is ignored in favour of an alternate reality in which Romania and Bulgaria aren’t emptying out but Russia is. Mercifully, the World Bank report doesn’t engage in any kind similarly baseless speculation. 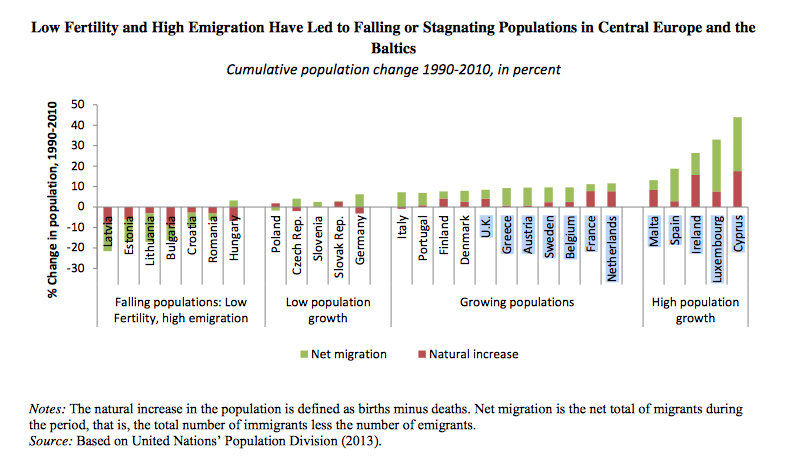 It is true that, in general, the World Bank report is a bit more optimistic than I am in its predictions for the future. It notes the very real economic strain that will inevitably accompany workforce shrinkage, but it doesn’t think this will be insurmountable. However, to a very great extent this reflects not any disagreement about the underlying demographic processes, but rather the authors’ confidence in the success of future policy adjustments. Emerging Europe will be okay, the authors say, if it rapidly institutes a broad-based programme targeted at demographic renewal.

In a narrow sense the authors are entirely right. Emerging Europe probably will be okay if it is able to implement programmes that can successfully boost fertility, encourage immigration and force people to work longer before retirement. Other countries, particularly Sweden and France, that once faced seemingly nightmarish demographic future have, through a combination of targeted assistance to mothers and generous immigration policies, managed to right the course.*

The problem is that the region’s track record suggests that complacency and inaction are likely to continue indefinitely. Just consider the fact that, on average, the Baltics have lost 20% of their total populations since 1992. That’s not a typo. Out of every five people who was living in the Baltics in 1992, one has either died or moved away. That is a shocking level of depopulation, losses that are completely unprecedented for countries not involved in a major interstate war.

But despite these losses, despite demographic trends that are some of the direst ever recorded, the Baltics haven’t done anything. They haven’t managed to meaningfully boost fertility, they haven’t done anything to fix their underfunded pension systems, and they are still experiencing massive outmigration. If that level of demographic decline wouldn’t spur the Baltics to more urgent action, what will?

Debating about the future can quickly become futile: there’s obviously no way, in 2015, of knowing what the Lithuanian prime minister will do in 2025. But considering how far many Emerging European countries have already gone down the road to demographic disaster, there’s not a particularly good reason to expect that they will suddenly snap into action.

To the extent it makes people more aware that so many seemingly successful countries are heading for crisis the World Bank report is invaluable. But, at the same time, it likely exaggerates the extent to which the region’s government can or will respond to the steadily worsening demographic problems now on their doorstep.

*There are many issues related to immigration in both countries, of course, but they are no longer faced with the spectre of unending population loss