During last year’s “taper tantrum,” triggered by the unexpected announcement in May by the US Federal Reserve that it planned to wind down its asset purchase programme, the financial markets – in particular the currencies and local bond markets – of Central and Eastern Europe (CEE) proved remarkably resilient.

Fast forward 16 months or so, and it’s now Emerging Europe – as opposed to Developing Asia and Latin America – that is the most vulnerable emerging market (EM) region.

The latest catalyst for uncertainty is September 17's more hawkish statement from the Fed. While the US central bank maintained its commitment to keeping interest rates low after it ends its programme of quantitative easing (QE) in October, it has raised the stakes for EMs by delaying its first rate hike and, as a result, increasing the scope for a faster-than-expected – and potentially more abrupt – tightening of US monetary policy in 2015 and 2016.

This is not good news for EMs and comes at a particularly inauspicious time for Emerging Europe.

The facts speak for themselves. Emerging Europe equities have lost nearly 9% over the past three months, dragged down by steep falls in Russian and Hungarian stocks. Since the start of this year, Emerging Europe shares are down 10%, compared with a 6% increase in Asian equities and a 9% rise in Latin American stocks.

In the closely watched foreign exchange markets in which EM currencies have come under pressure of late due to the resurgence of the US dollar, the Russian rouble – the second-worst performing major EM currency this year after the Argentine peso – continues to slide, losing nearly 14% since the end of June. The Turkish lira, meanwhile, has lost 7.2% against the dollar since mid-May.

Indeed, according to Bloomberg, among the 11 worst-performing EM currencies over the past month, seven are Emerging Europe ones (see table). 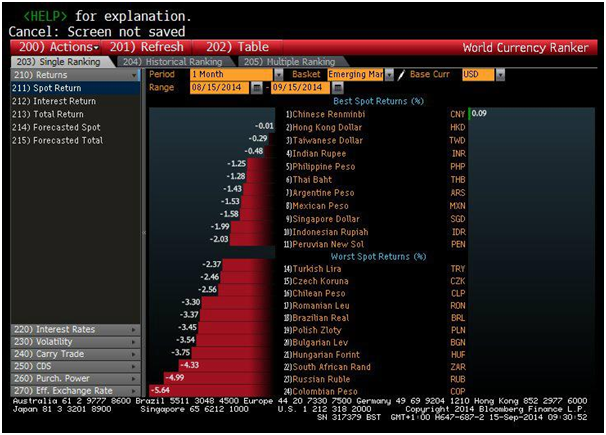 Even in Emerging Europe’s local currency debt markets which have proven much more resilient, returns on Russian, Hungarian and Polish bonds this year stand at -14%, -4% and 0.4%. According to Bank of America Merrill Lynch, which tracks foreign holdings of EM local government debt, non-residents reduced their holdings of Turkish and Hungarian bonds in August while increasing their exposure to Indian and Colombian debt.

Make no mistake about it, sentiment towards the Emerging Europe region as a whole is bleak.

CEE is caught between the Charybdis of the economic and market fallout from the escalating east-west standoff over Ukraine, and the Scylla of mounting concerns – particularly in the bond markets – that US interest rate hikes may be sharper than expected.

There were already signs in January – two months before Russia’s ruthless annexation of Crimea – that the focal point of market nervousness was shifting from Emerging Asia to Emerging Europe, partly because of concerns about the conduct of monetary policy in Turkey.

Unlike last year’s EM sell-off, in which countries with large current account deficits were singled out and penalised by investors, balance of payments weaknesses are no longer the only – or even the main – source of EM vulnerability, as the sell-off in Hungary (which boasts a sizeable current account surplus) illustrates.

There is now a broader set of EM risks which investors are sensitive to in varying degrees. These include geopolitical worries, the credibility of the policy regime, the prospects for growth and the degree to which EM currencies and debt markets are sensitive to a rise in the policy-sensitive two-year US Treasury yield, which has shot up 16 basis points over the past month to 0.58%.

Relative to other EM regions, CEE fares poorly on most fronts, with the average growth rate for the region this year roughly a third of the projected 6% rate in Emerging Asia – mainly due to a stalled recovery in the Eurozone and an escalating trade war between Russia and the West – and mounting concerns about policy credibility.

While Russian assets are bearing the brunt of the sell-off, idiosyncratic risks in other sovereigns in Emerging Europe are becoming more pronounced.

The most conspicuous one is the Turkish central bank’s cavalier approach to the surge in inflation, which stood at 9.5% in August. Turkey’s central bank has been cutting interest rates – admittedly from double-digit levels – since May, with the benchmark one-week repo rate now standing at 8.25%.

For a country with a hefty current account deficit financed almost entirely by speculative capital inflows and a government incessantly pressuring the central bank to cut rates further, Turkey's behaviour is not the way to prepare for a sudden deterioration in sentiment towards EMs.

Hungary is also treading on thin ice. Although its bond market is benefiting – as are those of other CEE economies – from the latest burst of monetary stimulus from the European Central Bank (ECB), Hungary's central bank is pushing the envelope. It has cut interest rates below those of Poland – which has a similar inflation rate but is a much stronger credit – at a time when the forint is under pressure, partly because of the uncertainty stemming from a highly controversial government scheme to phase out foreign currency-denominated mortgage contracts.

Other economies in Emerging Europe, notably Serbia and Croatia, are extremely vulnerable to a sharp increase in US Treasury yields due to dangerously high levels of private debt (a large chunk of which is in foreign currency), but are shielded somewhat by their relatively small and illiquid markets.

While last year’s sell-off was about the “fragile five” group of economies in various EM regions, the next bout of turmoil – which has already begun to some extent – is likely to centre around Emerging Europe.