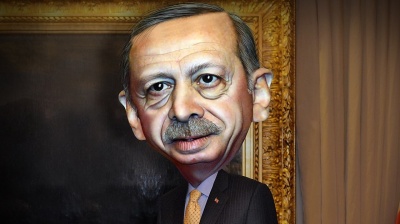 There is more to the decline of Erdogan than power fatigue says columnist and academic Bekdil. / DonkeyHotey CC-BY-SA-2.0
By bne IntelIiNews June 23, 2021

Turkey has turned into a caricature state under President Recep Tayyip Erdogan’s leadership. That’s the contention of Burak Bekdil, an Ankara based columnist and a fellow at the Middle East Forum, who, in an article for the Begin-Sadat Center for Strategic Studies (BESA), also looked at how deteriorating economic conditions in the country are dragging down Erdogan’s standing in the opinion polls.

“The spiral of mismanagement has been running at full speed, at times astonishing even Erdogan loyalists,” wrote Bekdil.

Popular support for Erdogan’s ruling alliance sunk to just over 32%, according to a May survey by pollster Turkey Report. Just 26.3% of respondents said they would vote for Erdogan’s Justice and Development Party (AKP), while 6% would back the ultra-nationalist Nationalist Movement Party (MHP), the junior electoral partner.

“This is not the Turkey we dreamed of,” a close Erdogan aide and co-founder of the president’s ruling AKP, told BESA, according to Bekdil. “Turks cannot decide whether to laugh or cry over several cases that hit the headlines within the span of only one month,” he said.

Explaining his depiction of Turkey as a caricature state, Bekdil referred to farcical cases in the country of late including a ludicrous amount of around 50 American cents that a restaurant owner was able to obtain from a government relief programme that offered cash support for small businesses affected by COVID-19; the imposition of an alcohol sales ban as part of pandemic lockdown measures; the provision by some AKP-governed municipalities in Turkey of hundreds of grey passports, sold to party loyalists, their families and friends so they could illegally emigrate to European Union member countries; a criminal complaint against ENAG, a group of academics that started publishing its own inflation figures in September amid the widespread suspicion that the Turkish Statistical Institute (TUIK) is underreporting inflation data to, Bekdil said, avoid “stoking public discontent against the government”; and an investigation into Ekrem İmamoglu, the opposition mayor of Istanbul, for disrespecting an Ottoman Sultan’s tomb.

“Every day, more and more Turks are joining the ranks of the opposition. There is more to Erdogan’s decline than power fatigue. He will find it very difficult to unite a majority of Turks around the flag and mosque in the presidential elections of 2023,” Bekdil concluded.