Clearstream to link Ukraine to global financial system on May 27 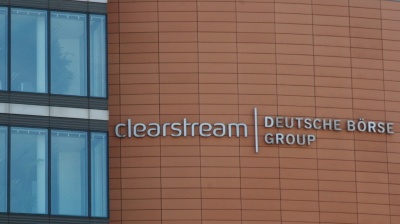 Ukraine's capital markets will be hooked up to the global financial system allowing international bond traders direct access to the local debt markets.
By Ben Aris in Berlin May 22, 2019

Ukraine’s capital markets will be hooked up to the global financial system on May 27, when it joins the Clearstream international payments and settlements system in a move that could revolutionise the government's ability to fund itself, the Ministry of Finance announced in a statement on May 22.

The long anticipated development could mean a revolution for Ukraine’s capital markets as bond traders in the international financial capitals of the world will be able to buy a selection of local and government bonds direct from their own dealing desks without the need for a Ukrainian-based intermediately.

As bne IntelliNews has been reporting interest in Ukraine’s high yielding local debt has taken off this year in anticipation of the change. Foreign investors have already invested over $1bn into the local market debt and now account for 5% of the bonds outstanding, up from nothing two years ago.

Ukraine is one of four countries that also includes Georgia, Belarus and Armenia that signed up for the “Clearstream-lite” deal where a limited number of securities are included on the platform. The local markets of these countries are too small to make it worth extending the platform to cover all the securities on offer, but the local debt markets are big and liquid enough to interest international investors with a large risk appetite who are looking for short-term high yielding bonds.

Clearstream is the international central securities depository (ICSD) of Deutsche Börse Group and will connect the Ukrainian market to its network to make Ukrainian government securities eligible in its system. Citi will act as cash correspondent bank and the local operator of Clearstream’s account at the National Bank of Ukraine (NBU), the finance ministry said in its press release.

“This step will enable settlement of all government bonds denominated in the local currency hryvnia through the international system of Clearstream, improving efficiency at international standards while reducing costs for investors,” the statement says.

Russia already put this reform into place in 2012 and saw the share of foreign investors in its local bonds explode. Today non-resident investors account for a bit less than a third of all bonds outstanding and the reform brought billions of dollars into the market. Ukraine is hoping to repeat the experience.

“This joint initiative should encourage an increase in demand for Ukrainian government bonds, boosting liquidity and their attractiveness in the international market. As a result, the Ukrainian government will benefit from a wider range of sources of long-term funding and a lower cost of borrowing. Moreover, the offering will improve the currency structure of public debt and transmission mechanism of the NBU monetary policy, while contributing to the further development of the Ukrainian capital markets,” the finance ministry said.

The reform comes in the nick of time as Ukraine is facing a debt mountain this year after bonds payments were delayed five years ago in the midst of an economic meltdown. Repayments over the next five years will rise to between $12bn and $15bn a year – sums that will be impossible to pay off without expanding the amount of money the government can raise on the domestic market.

Yuriy Butsa, Ukraine's government gommissioner for public debt management, commented: “We are happy that finally the last major bottleneck for the global local currency bond investors has been removed. This year we are witnessing a significant increase in the international investors’ participation in the local-currency bonds market. Foreign investors' holdings in Ukrainian domestic government bonds exceeded $1.5bn and continue to grow. With the Clearstream link opening, there is a great potential for the increase of the share of non-residents holdings of domestic government bonds as it is still around 5% of total local currency debt as of today, which is much smaller compared to other emerging market countries.”

The NBU launched the project on establishing correspondent relationships with Clearstream three years ago, according to Oleg Churiy, deputy governor of the NBU.

“Creating easy access for foreign investors to Ukrainian government securities will foster long-term investments in hryvnia instruments, reduce the state’s need for financing in foreign currency and respectively currency risks. We will continue to make domestic government bonds more attractive and its secondary market more liquid. In that respect, one of the next steps should be expansion of trading these instruments at the international trading platforms,” Churiy said.