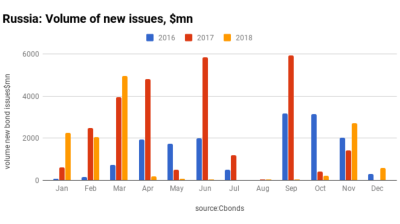 International bond issues had a mediocre year in Central and Eastern Europe (CEE) in 2018. While Central Europe more or less held its own with a total of $38,990mn worth of issues, according to CBonds data, the aggregate value of the bonds issued in the Commonwealth of Independent States (CIS) halved to $22,418mn even if the number of bonds issued fell by much less. In Russia, apart from November, there were almost no issues at all.

It's becoming clearer that 2017 was a vintage year for bond issues amongst emerging European markets. Since then the markets of both Russia and Turkey, which are responsible for the lion’s share of issues, had a terrible 2018.

Russia was hit by four rounds of increasingly painful western sanctions that are increasingly targeting both big companies and financial instruments. And the worst could be yet to come. The US government has threatened to impose “crushing” sanctions that initially were due in the last quarter of last year, but have been delayed to the first quarter of this year. Specifically, the upcoming sanctions could target Russia’s sovereign debt – both external and domestic – in what would amount to open economic warfare if it happens.

While analysts widely expect more sanctions on Russia in 2019, opinion is split over whether Russia’s state debt will be in the crosshairs. The problem is that Russian bonds are widely held in the west by institutional investors and any pain inflicted on Russia is certain to boomerang back and hurt US and European pension and insurance funds.

The chaos that the April 6 round of sanctions that targeted oligarch Oleg Deripaska’s aluminium producer Rusal caused on the London Metals Exchange (LME) led to the US Treasury Department (USTD) withdrawing the sanctions completely in December. A little more awareness that imposing financial sanctions on Russia comes with a real cost means the USTD is likely to be a lot more cautious with the Russian bonds and the organ has already suggested bonds will not be targeted.

In the meantime international investors have pulled back from Russia debt due to the uncertainty. Foreign investors withdrew some RUB500mn ($7.5bn) from the domestic bond market, reducing the share of foreign ownership in the Ministry of Finance’s workhorse OFZ bonds from a peak of 34% in April to 25% as of December. At the same time the yields on the bonds were up by some 200bp over the same period to just under 9% by the close of the year.

Turkey also had an awful year, suffering from a full scale currency crisis of its own making. As 2019 started, the economy is still recovering, but the tardy reaction by the central bank to the crashing lira has done deep damage and it will take the better part of this year for the economy to recover.

The average size of bond issues also fell in 2018. In CEE it was not so significant, dropping from $566mn in 2017 to $520mn in 2018. In the CIS the fall was more significant, but that was almost entirely due to the halving in size of bonds issued from $413mn in 2017 to $248mn in 2018. Contributing to this drop was smaller players like Russian broker-dealer BCS Global Markets, which was actively issuing a lot of bonds under $100mn to finance its business, whereas the issues in other markets tended to all be at least $100mn or more.

The outlook for this year is also for subdued activity amongst bond issuers. The sword of Damocles is still hanging over Russia and the increased yields issuers will have to offer will suppress supply. Turkey too may be out of intensive care, but it is still on the ward and will spend most of this year there, if not longer.