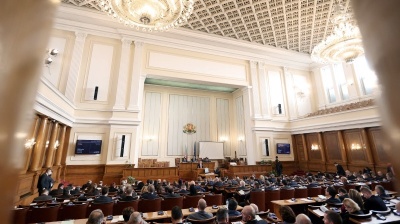 Bulgaria’s reformist Change Continues and Democratic Bulgaria said on November 17 they will boycott parliament sessions ahead of a debate on bringing back paper ballots, which they see as an attack on democracy.

During a marathon 18-hour session, the parliament’s legal committee already backed changes to the electoral law despite objections from Change Continues and Democratic Bulgaria, which say the changes will make it easier to buy votes and commit  electoral fraud.

There are also plans to close the section for Bulgarians voting abroad, which would make the voting process outside Bulgaria more chaotic, and use the voting machines Bulgaria recently bought to print paper ballots instead.

Critics of the changes see them as preparation for new early election by the parties that backed the changes – Gerb, the Movement for Rights and Freedoms (DPS) and the Bulgarian Socialist Party (BSP), dubbed by their opponents “The Paper Coalition”.

Bulgaria is likely to hold a new snap general election soon as the last election, on October 2, produced a highly fragmented new parliament and no party has yet managed to put together a majority.

During the session, the MPs of the three parties, which have a clear majority in parliament, voted in favour of all the changes and against the proposal from Democratic Bulgaria for cameras to be installed at sections where ballots are being counted to prevent abuses.

“What has happened last night was a farce and had nothing to do with the parliamentarianism. It was a mockery during which all masks fell. The goal was to replace the vote of the electorate. This was an attack against democracy. We told you yesterday – beware, now is the moment. And the assault against democracy has happened,” Andrei Gyurov, the leader of Change Continues’ parliamentary group, said.

He added that the BSP has “returned to the parties of the status quo” — after the BSP briefly worked alongside the two reformist parties in a four-party ruling coalition led by Change Continues’ Kiril Petkov.

According to Mediapool, the changes should be voted on by the parliament in the second reading on November 18. Democratic Bulgaria and Change Continues said they would not attend the parliament session until the start of the debate on the electoral law changes.

“The session of the legal committee was breaching the procedure. This is a demonstration of the force of the new majority, which is ready to rule and to hold elections in order to take power through [these] elections. The BSP has made a demonstration of full loyalty towards Gerb and the DPS,” Hristo Ivanov, one of the leaders of Democratic Bulgaria, told reporters.

Petkov, a co-founder of Change Continues, said that if the BSP supports the changes on Friday, a new coalition between the two parties will no longer be possible.

“The BSP must know that if the changes to the electoral law are adopted in plenary, we shall not enter in coalition with them. The decision is theirs,” Petkov said.

A few hours later, Boyko Borissov, the leader of Gerb, backed off and ordered his MPs to reconsider their support for some of the changes. He said at a press conference broadcast on Facebook that if Democratic Bulgaria can guarantee the machine voting cannot be compromised, his MPs would stop supporting the changes.

Gerb has talked of creating a pro-Western ruling coalition alongside Change Continues, but Petkov and his co-leader Assen Vassiliev have so far refused because of past corruption scandals involving Gerb.