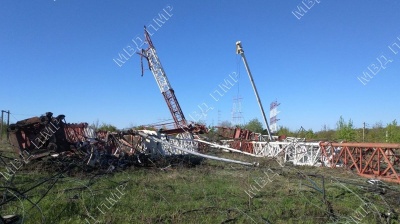 An image from the Transnistria interior ministry showing one of the destroyed telecommunications towers. / mvdpmr.org
By Iulian Ernst in Bucharest April 26, 2022

According to the press centre of the Ministry of Internal Affairs, the explosions at the Pridnestrovian Radio and Television Centre (PRTC) in the town of Maiak, Grigoriopol district in the Transnistrian region, occurred at 6:40 and 7:05 local time. There were no casualties.

The incident comes after the separatists’ Ministry of State Security (MGB) in Tiraspol came under attack from a grenade launcher on April 25. The incident, followed by a Russian propaganda offensive claiming Nato member Romania was preparing to capture Transnistria, was treated as a provocation by the Moldovan authorities.

While the impact of the attack on the empty headquarters of the MGB was rather symbolic, the destruction of the antennas seems to have more material implications.

Moldova has banned Russian radio and TV stations on its territory, but it is unable to enforce the decision in Transnistria, which has been under the control of pro-Russian separatists since the early 1990s.

On the other hand, the Moldovan authorities have constantly attempted to prevent the escalation of the situation in the separatist region.

PRTC’s capacity to still relay Russian radio and TV stations was not revealed.

The separatist authorities only confirmed that the two most powerful antennas were out of order: one of one megawatt, the second half-megawatt. Both has been relaying radio broadcasts from Russia.

PRTC is one of 14 radio transmitting centres in the former USSR. The radio centre was built in the late 1960s.

The territory of Transnistria will be used either as a “mobilisation reserve” (2,500 Russian troops are currently there and Russian nationals can join the army), or for launching attacks against Ukraine, the Ministry of Defence in Kyiv commented.

Ukraine has constantly warned of Russia attempting to undermine the stability in Transnistria and recent statements by officials in Moscow make such allegations more credible.

Major General Rustam Minnekayev, deputy commander of the Central Military District of Russia, claimed on April 22 that “the Russian-speaking population is suppressed” in Transnistria, and that it must be saved.

"Since the beginning of the second phase of the special operation, one of the objectives of the Russian army is to establish full control over the Donbas and southern Ukraine. This will provide a land corridor to Crimea, as well as influence the vital infrastructure of the Ukrainian economy, the ports on the Black Sea through which agricultural and metallurgical products are delivered,” Minnekayev added quoted by Deutsche Welle.

Government claims three quarters of foreign companies in Russia are still working
13 hours ago
Moldova says it won't be able to make next payment to Gazprom
13 hours ago
Russia resumes oil supplies to Slovakia and Hungary but imports to Czechia remain halted
13 hours ago
US charges Iran operative with plotting to kill former Trump hawk John Bolton
22 hours ago
Ukraine will receive $5.5bn in support from the US later this month
1 day ago