#BREAKING Belarus authorities try to forcibly expel Kolesnikova, who rips up passport and is detained at Ukraine border 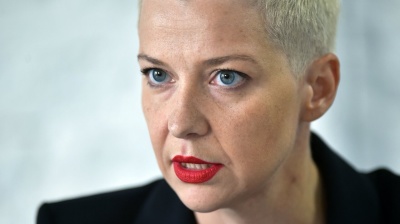 Opposition leader Maria Kolesnikova was thrown from a car speeding towards the Ukraine border. She reportedly ripped up her passport, refusing to leave the country. / Wiki.
By Ben Aris in Berlin September 8, 2020

Belarusian opposition leader Maria Kolesnikova has been detained at the border with Ukraine, Belarus state media reported, after authorities tried to forcibly expel her from the country. She was reportedly pushed from a car that sped towards the border, but refused to leave the country and ripped up her passport. Her allies said she was snatched off the streets of Minsk a day earlier on September 7.

Belarusian border authorities told Russian news agency Tass that Kolesnikova passed through the Alexandrovka border crossing at 4am on September 7, but Belarus state media later said she was detained at the border. Ukrainian border officials confirmed that Kolesnikova arrived at the frontier but did not cross into Ukraine. It appears that she was taken to the Ukrainian border, but refused to cross over, according to reports.

“Ukraine says that Members of Coordination Council [Kolesnikova and her colleagues], [Anton] Radniankou, [Ivan] Krautsou) were FORCIBLY expelled from Belarus. Maria [Kolesnikova] refused crossing the border in order to stay on the territory of Belarus, and this is the reason why she was detained,” Franak Viacorka, a local journalist, said on Twitter.

“Reportedly, when being deported from her own country, one of the protest leaders, Maria Kolesnikava, ripped up her own passport at the border. Without a passport, authorities were not able to kick her out and detained [her],” Viacorka added.

Kolesnikova was one of the trio of women that campaigned against Belarus' self-appointed President Alexander Lukashenko in the August 9 elections that were massively falsified to give the incumbent a landslide victory. Results from rebel polling stations that published the actual results show former English teacher Svetlana Tikhanovskaya won by a landslide.

“On 8 September at around 4:00 Anton Rodnenkov, Ivan Kravtsov and Maria Kolesnikova made an attempt to leave the territory of Belarus through the Aleksandrovka international road checkpoint at the Belarus-Ukraine border,” state-owned news outlet BelTA reported. “Taking into consideration the peculiarities of the checkpoint infrastructure and the terrain of the checkpoint area, this part of the border is reinforced and additional units of border guards are stationed there.”

Anton Bychkovsky, an official representative of the State Border Committee, said, as cited by BelTA: “Rodnenkov, Kravtsov and Kolesnikova passed the customs border control in a BMW car and headed for Ukraine. However, as they saw border guards, the car abruptly picked up speed, which posed a threat to the life of a border guard. Kolesnikova appeared outside the vehicle. In fact, she was pushed out of the vehicle that kept moving towards Ukraine.”

He went on to say that Rodnenkov and Kravtsov left the territory of Belarus, while Kolesnikova was detained.

Opposition leaders were concerned when Kolesnikova disappeared on the morning of September 7. Eyewitnesses told TUT.by, a local news outlet, that she was snatched from the street in central Minsk and bundled into a mini-van. Later attempts to contact her by phone got no answer. Two of her colleagues from the campaign team were also detained and disappeared. Kolesnikova is the last of the trio, that also includes Veronika Tsepkalo, wife of another presidential candidate excluded from running by the authorities, to have stayed in Belarus.

Earlier, following a meeting at the Central Election Commission (CEC) a few days after the vote, Tikhanovskaya was forced into making a statement calling on Belarusians to accept the official results making Lukashenko the victor and called for an end to the protests. She immediately left for Lithuania, where she resumed her campaign to oust Lukashenko, appealing to the international community for help.

It now appears that an attempt was made to make Kolesnikova flee. She is also a member of the newly established Coordinating Council that was set up by the opposition to negotiate with Lukashenko and which has been calling for a transitional government and fresh elections.

Only two other members of the presidium of the Coordinating Council remain at liberty in Minsk, Nobel literature laureate Svetlana Alexievich and lawyer Maksim Znak. Both Tikhanovskaya and Tsepkalo have already fled into exile. A total of some 70 people were invited to join the body who represent prominent Belarusians from all walks of life.

Kolesnikova’s disappearance provoked a sharp response from the international community. Germany’s Foreign Minister Heiko Maas issued a statement saying the German government was “concerned” over her fate and demanded “clarity on the whereabouts and the release of all political prisoners in Belarus”, adding that the EU was in the final stages of drawing up sanctions on Belarus and was “prepared to act.”

It now seems that Lukashenko is attempting to forcibly expel all his prominent opponents in an effort to hamstring their ability to organise resistance in Belarus.

“This is terror at the state level. Stalin's KGB methods in action. National Coordination Council leaders are being abducted by masked men. By night, then they end up either in prison or in neighbouring countries. This is against the Constitution, this is against common sense,” tweeted Viacorka.

Ukraine will receive $5.5bn in support from the US later this month
11 hours ago
John Malkovich to turn Skopje into Hollywood of the Balkans
11 hours ago
Envoy says start made on construction of Turkish attack drone factory in Ukraine
20 hours ago
Huge explosion rocks Russian airbase on the Crimean peninsula
1 day ago
Russia cuts oil flow via Ukraine's Druzhba pipeline, blaming sanctions for blocking transit payments
1 day ago