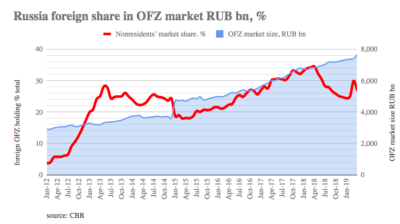 “Bond fund flow indicators are flashing red – first weekly outflows in 2019 from bond GEM funds were reported last week. Overall, net $0.9bn left all EM bond funds last week ending the inflows spree that has brought more than $25bn of fresh investor money into the asset class since the beginning of the year. We continue to highlight the negative momentum for bonds, and believe more outflows are on their way in the coming weeks,” Vyacheslav Smolyaninov, chief strategist and deputy head of research at BSC Global Markets, said in a note.

Bonds have caught most of the attention this year with investors still largely ignoring the Russian equity market, according to Smolyaninov.

“For Russia-dedicated funds the reported fund flow data was almost the same as in the previous week – small inflows into the country-dedicated ETFs faced larger outflows from traditional funds,” the analyst said.

As bne IntelliNews has reported there has been a very sharp uptick in inflows into the Russian Ministry of Finance ruble-denominated OFZ treasury bills since the start of this year as sanctions fears recede. Foreign investors were overweight the high-yielding but rock solid OFZs last year, with the foreign shareholding in total OFZs outstanding rising to 34% in April. But after the US imposed the painful April 6, 2018 round of sanctions, particularly on oligarch Oleg Deripaska, they sold off some RUB500bn ($7.7bn) worth of OFZs and the foreign share fell to 25% as of the end of the year.

In the first quarter of this year all of that money has come back. The Ministry of Finance has held a series of record-breaking auctions and the foreign share in OFZs has risen to 30% again, according to Central Bank of Russia (CBR) data.

Russia has been withdrawing from the international capital market and sold off circa $100bn of US treasury bills last year, while at the same time it has been stockpiling gold. The Ministry of Finance has turned to the OFZ market to raise money it needs to run the country and the borrowing limits set in the budget have been more than doubled to around RUB2 trillion this year. Ironically, Russia is now increasingly dependent on foreign investors buying its OFZs to fund the government's operations.

However, the sell off is already showing up in the CBR’s statistics in a notable downturn in April. In March foreign investors owned RUB1.9 trillion worth of OFZ from a total market of RUB7.4 trillion, or just shy of 30% of the total outstanding. But in April while the amount of OFZs that foreigners owned increased slightly to RUB2.0 trillion their overall share of the total of RUB7.7 trillion had slipped back to 26.7%, on a par with January 2017.

Part of what is depressing enthusiasm for Russian OFZs is the talk of sanctions has reappeared in Washington after senator Lindsey Graham renewed calls for more and more stringent sanctions on Russia in a speech last week. The US Congress is due to vote on the draft proposed Defending American Security Against Kremlin Aggression Act (DASKAA) sanctions in the first half of this year and there is a possibility that the new round of sanctions could target Russian sovereign bonds, including the OFZs.