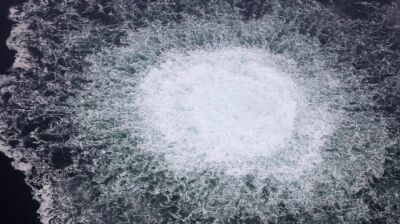 Gas bubbling at the Explosion site in the Baltic Sea / Swedish Coast Guard
By Richard Lockhart in Edinburgh October 8, 2022

The explosions on September 25 at the Nord Stream 1 and 2 pipelines in the Baltic Sea off the Swedish and Danish coasts could create a climate catastrophe that is just beginning to be realised, although it offers rare opportunities to measure the exact impact of methane emissions on the environment.

Already dubbed the worst methane leak ever, the three explosions, which created three holes in the two systems, which each consist of two pipes, have released about 300,000 tonnes of methane, causing a 700-metre-wide pool of bubbling water in the Baltic Sea.

The explosions, which the Ukrainian government immediately blamed on Russia, while the German government suggested sabotage, have created large releases of methane, the scientific name for natural gas.

The leak will make it more difficult for Europe, and indeed the world, to meet climate change goals, although the exact effects of the released gas on the environment are just beginning to be realised.

Before the leak, meeting the Paris Climate Agreement’s goal of limiting the global temperature rise to 1.5˚C would require methane emissions to fall by 45% by 2030, the UN’s Global Methane Assessment said in 2021. Such a reduction would avoid nearly 0.3°C of global warming by 2045.

The Nord Stream methane leaks have the potential to cause chaos for efforts to reduce methane emissions over the next two decades, and could increase the already high danger of failing to meet net zero by 2050.

The explosions took place at a depth of 80-90 metres just outside Danish and Swedish territorial waters. This means that sophisticated and advanced underwater technology, or even a submarine, would have been required.

While Germany and the EU pointed the finger at Russia, the Kremlin denied any responsibility, pointing to explicit threats by US President Joe Biden and others ahead of the war that the US would shut down Nord Stream 2 if Russia invaded Ukraine. Russian media also highlighted that a US helicopter was seen in the vicinity on September 25.

The United Nations Environment Programme (UNEP) said it was biggest single release of methane ever.

Nature of emissions of CH4 compared to CO2

Methane’s main danger is that it is 80 times more damaging in the short term than CO2, say experts. On the other hand, methane stays in the atmosphere, about 15-20 years, a much shorter time than CO2, according to the International Energy Agency (IEA). It dissipates faster than CO2 but is a much more powerful greenhouse gas (GHG) during its short lifespan, meaning that cutting methane emissions would have a rapid effect on limiting global warming.

Methane is responsible for around 30% of the rise in global temperatures since the Industrial Revolution, the IEA said in March, noting that global methane emissions had risen by 5% in 2021

The UNEP's International Methane Emissions Observatory (IMEO) warned that the leak had occurred at a time when it is imperative to reduce emissions. Indeed, methane was a major focus of the COP26 conference in Glasgow in 2021, when countries agreed to reduce methane emissions by 30% by 2030, while the gas also featured in the US-China bilateral climate agreement agreed at the event in Scotland.

The Global Methane Pledge could account for 800mn tonnes of CO2e reductions by 2030, according to Climate Action Tracker.

Meanwhile, the IEA warned that its Net Zero Emissions by 2050 Scenario required energy-related methane emissions to fall 75% by 2030.

The explosion took place against the background of Russia’s invasion of Ukraine and Western retaliatory sanctions on the Kremlin.

Russia had already stopped gas exports to Europe via Nord Stream 1 at the end of August, while Nord Stream 2 had never operated commercially.

The explosions now mean that any hope of using Nord Stream 2 as a gas import route by Germany is scuppered, and pose serious questions about Europe's, and especially Germany’s, reliance on imports of Russian gas.

Nevertheless, Manfredi Caltagirone, the head of the IMEO, warned that the environmental effect of the ruptures poses far more serious long-term questions for the world’s ability to meet its net-zero goals.

He warned that the damage to the pipeline posed a problem beyond energy security. “This is the most wasteful way to generate emissions,” he said.

The one ray of hope from the leaks is that the sudden discharges of methane into the atmosphere will offer scientists new insights into how methane affects the climate and will increase the knowledge base required to combat global warming.

Tools for measuring impact of CH4

The disaster in the Baltic Sea offers researchers better opportunities to measure the impact of the leak without government or companies making it difficult to assess because of official denials or difficulties in accessing the site.

In 2021, major emissions were confirmed in Texas and Central Asia, while Turkmenistan caused a third of large emission events from oil and gas seen by satellites. In 2022, a gas leak at oil wells in Mexico produced 40,000 tonnes of methane

These were detected and monitored by emerging satellite technology, which can discover, monitor and measure methane leaks that were previously unknown or were difficult to measure accurately. Common sources include gas pipelines, oil wells, fossil fuel processing plants and landfills.

For example, data from the TROPOMI instrument on the European Sentinel 5P satellite, which is part of the Earth-observing constellation Copernicus, has detected methane at an oil and gas pipeline in Kazakhstan and at oil and gas production facilities in Turkmenistan.

Tropomi's operations have detected preventable emissions from oil and gas fields in Turkmenistan. The installations should have built hardware that would flare off or burn the methane, thereby preventing it from leaking into the atmosphere.

However, the satellite has detected that this is not happening, suggesting that flaring is not taking place, either deliberately or because the technology is not working.

Putting the Nord Stream leak into perspective, the world's coal mines knowingly release the same amount of methane, 300,000 tonnes in total, every 2.5 days, while the mines released 43.5mn tonnes of CH4 in 2021.

Meanwhile, the Danish government said that the climate impact of the gas leak corresponded to about one-third of the country’s total climate impact in one year. This is the equivalent of 778mn cubic metres of natural gas.

Meanwhile, the US oil and gas industry intentionally releases 300,000 tonnes, an amount that could perhaps be labelled a “Nord Stream,” every two and a half weeks, Bloomberg reported.

What this means is that while the leaks in the Baltic are attracting global attention as a one-off disaster, similar methane emissions of equal size are happening every week across the world.

On October 3, the Swedish prosecutor closed off the site of the leaks, pending investigation in to what it said was “suspected gross sabotage”.

While investigations continue, and accusations about who is responsible and what the effect on security in the Baltic Sea read might be, the negative effects on the environment will outweigh any geopolitical impact.

The world must also learn that while the gas leaks can be regarded as isolated developments, they have highlighted that catastrophes of similar scale, reach and impact are happening on a continual basis.

The world is experiencing “daily Nord Streams” as it continues to pump out emissions and use up fossil fuels.

bneGREEN: Most growth in power generation by 2050 will be solar and wind – BP
2 days ago
bneGREEN: Renewable energy was a hot topic in Davos but for Europe, much work remains
8 days ago
bneGREEN: Floods turn Drina river in Bosnia into floating landfill
11 days ago
Central Asia’s shorter winters are whittling away glaciers
16 days ago
bneGREEN: River of waste clogs Serbia’s Lake Potpec after heavy rains
17 days ago