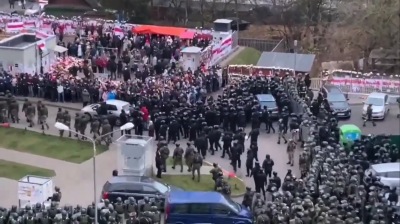 The Sunday protests in Belarus were reinvigorated after police brutally beat a protester to death during the previous week, causing widespread shock and anger.
By bne IntelliNews November 16, 2020

Hundreds of Belarusian OMON riot police clashed with demonstrators at the “Square of Changes”, who were trying to prevent the authorities from dismantling a makeshift memorial to the 31-year-old Raman Bandarenka (Russian: Roman Banderenko), who was beaten to death by police earlier in the week in the square.

The Belarusian protests reached their 100th day on November 15, but the traditional Sunday mass rally this week, dubbed the March of Brave People, was again small in comparison to the previous demonstrations. However, it was also far more violent, as by nightfall there were multiple reports of screaming heard coming from a police station where detainees were sent.

The main focus of the clashes as Peremen Square – better known to Minskians as the Square of Changes – where a large crowd gathered to protect an impromptu memorial to Bandarenka, who was beaten to death by police on November 12 after he tried to prevent officers cutting red and white ribbons off a fence outside his apartment block. The killing led to an outpouring of anger, frustration and grief.

The OMON was sent in in larges number to clear away a sea of red and white ribbons residents had added to the fence following Bandarenka’s death, and a very large pile of flowers to commemorate him.

Residents of the square formed a phalanx and linked arms, refusing to be moved until the OMON started throwing stun grenades into the crowd and charged, wielding batons to drive the protesters away. As they fled the police onslaught, the OMON took procession of the square and began to clear the flowers, posters and ribbons away. 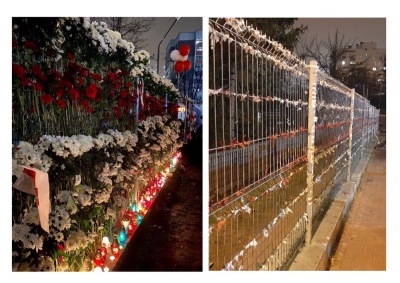 Many of the protesters were arrested. The chef of OMON, Dmitry Balaba, arrived and personally argued with the protesters. He told them that they had been cordoned off and could not leave and tried to persuade them to get on buses standing nearby to be taken to detention centres. He stated that he was defending the country and claimed that the protesters are just 2% of the people in Belarus.

In one incident posted on social media, four masked OMON troops surrounded a protester on the street and brutally clubbed him to the ground with batons before arresting him.

In another, a group of at least six masked OMON entered a supermarket and clubbed a man to the ground before tying his hands and arresting him, while shoppers tried to intervene, at least one of whom was also arrested.

The Telegram channel “Lists of Okrestino” reported that 1,072 people were arrested. A week earlier over 1,000 demonstrators were arrested, the highest number since the first three days of arrests immediately after the elections were held in August.

“Belarus Day 99. People attempted to gather for a human chain of solidarity in one of the neighbourhoods in #Minsk, but were detained. Human rights defenders have the names of 873 people detained today. I am quite sure that by tomorrow, this figure will be over 1,000,” tweeted Hanna Liubakova, a local journalist.

And as the evening fell disturbing reports emerged that the police had begun to use torture again on detainees.

“Those who are now near Frunzinskiy police station confirm that they hear people screaming from the gym which is located on police station territory. The employees of police station refused to talk with press. Press service of MIA is not available,” tweeted the Telegram channel “Voices from Belarus", citing reports from TUT.by.

Similar reports emerged in the first days of the protests, where relatives gathered outside the various detention facilities in Minsk reported and recorded screams emanating from the buildings as security forces tortured detainees. Other eye-witness accounts, including a Russian journalist caught up in the police sweeps, confirmed the inhuman conditions and beatings detainees were subject to in the pre-trial detention centres. Those brutal acts appeared to have resumed in the latest state crackdown on the protesters.

Peremen Square has become iconic in the protests against Belarus' self-appointed President Alexander Lukashenko, who massively falsified the August 9 presidential election to give himself a landslide win. It is home to a mural of the two DJs that defied the government by playing famous Soviet rock singer Viktor Tsoi’s popular song “Changes” at a government-sponsored concert shortly before the elections that has become an anthem for the protest movement. The mural of the two DJs has been painted over by the authorities on multiple occasions only to be repainted by residents during the night, and has become a symbol of the people’s resistance to the mounting repression Lukashenko has unleashed on the population.

The killing immediately sparked protests and widespread outrage as residents of Minsk gathered to mourn Bandarenka’s slaying. A national day of mourning was held on November 13 and the high emotions have fuelled a renewal of the protest movement that was losing momentum after opposition leader Svetlana Tikhanovskaya’s calls for a general strike to start on October 26 largely failed.

At the last weekend mass demonstration on Sunday tens of thousands of demonstrators turned out in Minsk, but that was well below the 100,000-plus that have attended the marches every weekend to date.

Lukashenko continues to tighten the noose around protesters’ necks to try to bring the protests to an end. The law was changed last week to make protesting a criminal offence, dramatically increasing the potential sentence from a maximum of 15 days to several years. And later in the week laws were proposed that could strip convicted protesters of their citizenship and so remove all legal protection they currently enjoy under Belarusian law.

Lukashenko is talking about finding a way for universities to take back students who were expelled for protesting as he seeks a way back to normality without success.

There are also signs that the Kremlin is losing its patience with Lukashenko’s failure to bring the protest to an end.