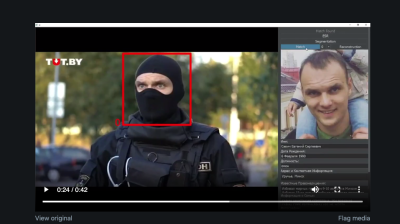 Belarus' protesters have been grabbing the masks off OMON troops to face and shame them into abandoning Lukashenko. New software developed by Belarusian IT specialists means they can now identify OMON officers even if they are wearing a mask / wiki
By Ben Aris in Berlin September 25, 2020

IT specialists based in Los Angeles have developed software that allows them to identify police and OMON riot police officers even if they are wearing a mask. The information, including their names, address and telephone numbers, is then added to growing blacklists published online that are documenting abuses committed by the security forces during demonstrations against Belarus' self-appointed President Alexander Lukashenko.

“IT country rocks! Belarusian IT specialist from Los Angeles uses artificial intelligence to deanonymize the punishers and reveal their real faces hidden under balaclavas,” Franak Viacorka, a local journalist said on Twitter.

The public have been pushing back against the brutal oppression unleashed by Lukashenko, who secretly had himself inaugurated this week. In an effort to undermine his hold over the security forces, the pubic have adopted a new tactic in the last weeks of ripping off the facemasks of officers that have been snatching pedestrians from the street or trying to break up protests.

And the OMON have clearly been unsettled by the tactic, as they usually beat a hasty retreat once their mask is removed, clearly made uncomfortable if their face is visible.

The doxxing of officers has already begun based on pictures of those that have their faces exposed during clashes with protesters, especially women, who have adopted the tactic of ripping off their masks to prevent the OMON from manhandling knots of women with linked arms protesting on Saturdays that has proved to be very effective.

Half a dozen blacklist websites have been established where the faces, personal details and abuses are posted, with different lists for each regional city or big town.

In addition, a group calling itself Cyber Patriots hacked the Ministry of the Interior’s computers and downloaded the entire list of ministry employees that includes the names and personal details of all the police and OMON officers, but not those of the elite Almaz special forces which are under the KGB. Nexta released the first 1,000 names two weeks ago and last weekend added another 1,000 names of officers that live in Brest after officers there were especially violent against demonstrations in Brest last Sunday. The facial recognition software will allow for more linking and documenting abuses by officers to this larger list of names.

The result will be to identify an officer and his actions to the community in which he lives. The social pressure from an officer’s local community will mount as a way of exerting pressure on officers and encouraging them to quit.

At the same time, the Nexta Telegram channel has set up a site that where officers can register and denounce abuses by the Lukashenko regime to thereby exonerate themselves from later prosecution, assuming Lukashenko is ousted. However, the officers also have to turn informant and share information with Nexta, according to its announcement.

There is no public information on how many officers from the police or OMON have taken up this offer, but there are confirmed reports on social media that some 200 officers have taken this step out of a total force of 1,500 OMON officers and several thousand police officers of the Interior Ministry.

The software is imperfect and the footage or picture needs to show enough of the face for it to work. Balaclavas that just have eyeholes are enough to maintain an officer’s anonymity, but another kind of balaclava that shows the portion of the face around the eyes is enough for face recognition software to work. And in the scrum that develops when officers wade into crowds, their masks are often pulled down from at least part of their face, exposing enough of it for an identification to be made.

Two dramatic examples of how the software works have been posted in the last day. The first shows a notorious incident where two OMON officers had knocked a 15-year-old boy to the ground, who they then arrested. A women passing by bravely stopped to berate the officers: “What are you doing?! He is only a child!” she scolded them in a clip that went viral.

In the video clip released by the developer, the image of the masked OMON officer standing over the boy is fed into the system that then searches the internet for the face of the officer, which quickly identifies him and then superimposes the face on the picture of the masked officer, who is then doxxed.

In a second example, three OMON officers waded into a crowd of women during the Saturday women’s demonstration two weeks ago, that was reported by bne IntelliNews “The Banshees of Belarus.” The officers tried to drag several women off to waiting paddy wagons but found themselves attacked from all sides by women grabbing at their masks and partially exposing their faces. The officers turned from trying to grab the women to desperately trying to keep their masks on and were forced to give up and beat an ignominious retreat. Although the officers’ faces were not completely exposed, enough of the face was revealed to allow the software to identify the officers and they have also now been doxxed.

The doxxing of officers based on a partial exposure of their face runs the risk that innocent people will be misidentified, but Nexta has called on the population to participate in the project and provide more information on each officer, including “their car, their habits, their mistress,” etc, so if someone is mistakenly accused of being an OMON officer presumably this checking process can exonerate the innocents.

The outing of officers also runs the risk of locals taking retribution on the officer and his family, if he has one, that could lead to retribution or even violence against the families. However, the doxxing is one of the most effective techniques available to the population to put pressure on the security forces and sow dissent amongst the officers that is needed to cause the security force officers to abandon Lukashenko, which would break his hold on power.

Belarus’ IT specialists have been especially outraged by the crackdown, as they have created the only fully modern and competitive sector in the country that earned over $2bn last year in export revenues, or some 3% of GDP. 300 CEOs of top Belarusian IT companies said they would move their businesses abroad if the crackdown didn't stop, as theirs is a creative business and can’t operate in an atmosphere of repression.

There are other efforts to undermine the unity of the security forces. Poland announced on September 24 that it is offering jobs to any security officer that is willing to abandon Lukashenko, including a relocation package and help finding accommodation and a job. Both Lithuania and Poland have relaxed visa and work permit regulations for Belarusians fleeing the country for any reason.