Bank lending in Georgia up 12.9% y/y at end-September 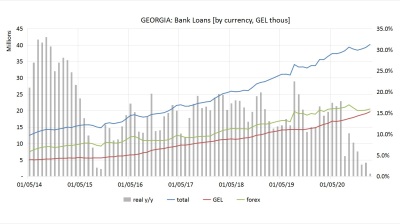 The stock of non-government bank loans in Georgia increased by 12.9% y/y as of the end of September to GEL40.14bn ($12.86bn), marking one of the lowest annual growth rates since 2016, according to data reported by the National Bank of Georgia.

It was the second-lowest nominal annual increase rate, after 12.3% y/y in April.

But the nominal advance of lending was nearly fully offset by the rising inflation.

On a positive note, the dollarisation of the bank loans portfolio in Georgia diminished somewhat, but it remained quite high at 51.0% at the end of September, compared to 56.9% one year earlier.

The loan portfolio is roughly equally split between companies and households (49%:51%) and the annual growth rates are roughly similar as well. Thus, the stock of corporate loans rose by 12.8% y/y while household loans rose by 13.4% y/y.

Speaking of the sectors with the most dynamic borrowing rates, loans to agriculture soared by nearly 50% while the sectors of transport and constructions boasted robust growth rates as well (+25% y/y and +23% y/y respectively). The stock of consumer loans (GEL5.6bn, more than a quarter of the household loans) rose by 24% y/y, while mortgage loans (more than half of the household loans) advanced by only 9.8% y/y.

Turkish official inflation calculated at 83% y/y for September
2 hours ago
Poland’s inflation unrestrained in September at 17.2%, flash estimate shows
9 hours ago
Russia’s industrial output decline slows to only 0.1% in August
3 days ago
Poll shows Putin's popularity took hit in September but remained as high as 77%
3 days ago
Russia on track to have a record-smashing grain harvest
5 days ago