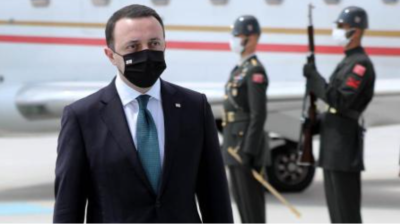 Georgian PM Irakli Gharibashvili during a state visit to Turkey. / Government of Georgia.
By Neil Hauer in Tbilisi August 5, 2021

The Baltic states have reportedly denied Georgian Prime Minister Irakli Gharibashvili official visits that were planned for the coming week.

The refusals—reported by Lithuanian news outlet 15min on August 4—allegedly occurred due to the perceived unwillingness of Georgian authorities to punish those responsible for the July 5 far-right violence against dozens of journalists and LGBTQ activists that resulted in the cancellation of a Tbilisi Pride event.

According to the sources cited by 15min, “in Lithuania, Latvia, and Estonia, the decision to diplomatically refuse to accept Gharibashvili was coordinated at both the parliamentary and governmental levels”.

The news outlet's article said that the rejection of the planned visits was also linked to the ruling Georgian Dream party abandoning the EU-brokered April 19 agreement to end Georgia's political crisis. It cited MP Zygimantas Pavilionis, the Lithuanian parliamentary foreign affairs committee chair, as describing the withdrawal from the agreement as “an unprecedented crossing of the red line”. Recent events have called into question Georgian Dream’s commitment to establishing a democratic state that would be welcome within the EU and Nato, as bne IntelliNews reported on August 4.

Georgian media agency Interpressnews cited the Georgian Ministry of Foreign Affairs as describing the reports about the cancellation of Gharibashvili visits by Estonia and Latvia “speculation.” The ministry said that the visits could not have been planned for the reported dates of August 8-9 since it was “a date of state significance” for Georgia, alluding to the 13th anniversary of the 2008 Russo-Georgian war. The 15min article did not specify the exact dates for the planned visits.

Reports about the Baltic states denying Gharibashvili official visits have circulated in Georgian media over the past few days.

The 15min story prepared by Lithuanian foreign affairs journalist Gintaras Radauskas also suggested that the Georgian PM was not being made welcome by Washington DC, presumably on similar grounds. That claim was earlier denied by the Georgian government.

According to rankings compiled by Freedom House, political freedoms in Georgia dropped by four points (from 27/40 to 23/40) from 2017 to 2021, driven primarily by increasing electoral irregularities and a greater willingness by police to forcibly disperse rallies.

US State Department spokesman Ned Price implyied on July 14 that targeted sanctions aimed at Georgian Dream officials could be forthcoming. Later that same day, the EU suggested in a statement that Georgia might not receive the full second tranche of funding under the present EU-Georgia financial assistance project.

BREAKING: Putin signs off annexation of four Ukrainian regions
22 minutes ago
Kremlin preparing for a protracted conflict by putting Russian economy onto a war footing
4 hours ago
Hungary’s forint slides to new low after central bank ends tightening cycle
7 hours ago
Slovak ministers criticise Czech border controls
7 hours ago
Might Trussonomics be a branch of Erdoganomics?
12 hours ago