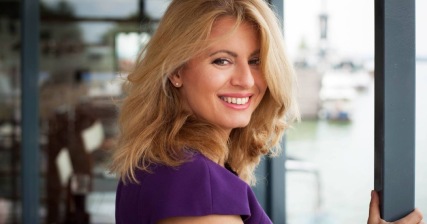 Zuzana Caputova came out of nowhere to win Slovakia presidential election in March
By nto in Prague June 17, 2019

Slovakia's outgoing president Andrej Kiska handed over the Presidential Palace to the new head of state Zuzana Caputova on June 15. “I did not come to reign, but serve people,” Caputova said in her inauguration speech.

“By taking the constitutional oath, I assume all the commitments and obligations of the public service. I haven't come to rule, I've come to serve citizens, inhabitants, Slovakia. I'll serve the well-being of the Slovak nation, national minorities and ethnic groups living in the Slovak Republic,” Caputova said.

Known as the “Erin Brockovich of Slovakia” Caputova is a lawyer and an environmental activist, who came out of left field in the recent elections, riding the wave of frustration at the corruption amongst the existing political elite.

Caputova also highlighted the peaceful split of Czechoslovakia, the drastic economic measures that Slovakia went through due to one-third decrease of its central bank´s foreign exchange reserves after break-up, the successful accession of Slovakia to the European Union and the Schengen area, and claimed an allegiance to the pro-European and pro-Atlantic orientation of Slovakia

She reminded that the protests following the murder of journalist Jan Kuciak and his fiancee Martina Kusnirova, that are partly responsible for catapulting her into office, underline the importance of the importance of the rule of law. “Too many people in Slovakia have gained a justified belief that this is not true in our country. The sense of social injustice has intensified and has taken two forms:  a form of calling for change and for decency, but also a form of anger at the system,” said Caputova, as quoted by the Slovak News Agency (SNA).

“Ms. President repeatedly said she wants to be president of all citizens of Slovakia. We'll be happy to see this come true. There's hardly anything we can criticise in it,” said Freedom and Solidarity (SaS) party chair Natalia Blahova, SNA reported.

“We heard nice words, now it's time for deeds. I was most impressed by the appeal to the dignity of every person's life and the promise that she'd be the voice of those who aren't heard. These are the two main goals of my stay in politics," the Opposition OLaNO chair Igor Matovic said in response to the president's speech," said Matovic, according to SNA.

“Ms. President is coming to the top constitutional post with a direct mandate from the people. In order to handle it well, she will need a courage, determination and be a fast learner,” Slovak Prime Minister Peter Pellegrini (Smer-SD) stated in his social network post on June 14.

“She comes from a specific political party. We'll see how she'll preserve neutrality and a non-partisan attitude in the [election] campaign itself, to what extent she'll intervene in the election,” said Smer-SD MP Erik Tomas, quoted by Hospodarske Noviny.

Caputova won the second round of the presidential election with campaign slogan “Against evil, Restoring justice” on March 30, when she took 58.4% of the votes against European Commission Vice President Maros Sefcovic who ended up with 41.6%.

She was a relative political outsider before the election, though she was known for her work as lawyer in a high-profile case concerning an illegal landfill in her home town of Pezinok. She was a member of the liberal Progressive Slovakia party, but stepped down as vice chair of the party in late March.

In April, former president Kiska announced he will set up his own political party to compete in the next parliamentary elections, after his term as president expires. “Slovakia wants a change. We won this [presidential] election, now we must win the parliamentary election. That's why I will set up a political party. I want to unite decent and willing people and change our country for the better,” said Kiska in a video posted on Facebook, adding that as the non-partisan president he will provide further information on June 17.

Hungary’s most powerful oligarch says he is just a lightning rod for attacks on Orban
2 hours ago
US sanctions on Russia’s OFZ local debt come into force
2 hours ago
Moscow back on lockdown as coronavirus infection rate surges again
9 hours ago
Lukashenko pushing illegal Iraqi refugees over the border into Lithuania
10 hours ago
Belarus is the “North Korea” of Europe, says US diplomat
3 days ago