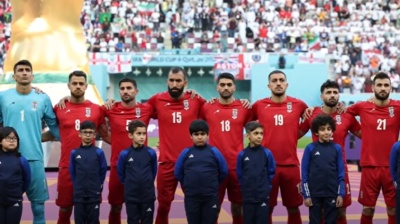 Iran's players stand silent as the national anthem is played before the game against England. / Screengrab
By bne IntelIiNews November 22, 2022

For Iran’s anti-regime protesters, November 21 was a day when they could take pride in the Iranian football team’s silent show of solidarity as the players declined to sing the national anthem prior to their opening match at the Fifa World Cup finals, but it was also a day that brought chilling warnings that the Islamic Republic’s clerical leaders are seeking to quell the unrest with an intimidating use of death sentences.

Iran’s players stood solemn and silent before the match with England at the Khalifa International Stadium in Qatar, while thousands of Iranian fans shouted or jeered as the anthem was played. Some Iranian protesters in recent days complained about a perceived lack of support from the players and, following a 6-2 defeat, the team’s coach Carlos Queiroz was clearly unhappy at the pressure his squad has been put under by the mixing of sport and politics, saying: “Those that come to disturb the team with the issues that are not only about football opinions, they are not welcome because our boys are just simple football boys. These kids, they have one dream: to play football. It is not their fault the World Cup happens in this moment.”

BBC football presenter Gary Lineker remarked on air after the anthem protest: "I must say it was a powerful and very, very significant gesture... It's football trying to use its power for good."

Back in Iran, activists were warning that the regime, already one of the world's most prolific users of the death penalty, was planning to use capital punishment as a means to spread a climate of fear in the population that would put an end to the protests, now into their third month.

The judiciary has so far confirmed six death sentences over the protests, while, according to Amnesty International, official reports indicated that at least 21 more people currently on trial were facing charges that could see them hanged.

Amnesty added that the authorities' pursuit of the death penalty was "designed to intimidate those participating in the popular uprising... and deter others from joining the movement".

The human rights group condemned a "chilling escalation in the use of the death penalty as a tool of political repression and the systematic violation of fair trial rights in Iran".

The Iranian judiciary has conspicuously not named the six convicts already sentenced to death. One theory is that the anonymity is aimed at stopping their names becoming rallying causes or social media hashtags. However, Amnesty said that information revealed about the charges they faced enabled researchers to uncover their probably identities.

November 21 also brought a report from the Financial Times on how workers in Iran have responded cautiously to calls from activists for all labour groups — including merchants in the bazaars, teachers and workers in the oil sector — to stage strikes in the hope that this would turn the unrest into a revolution.

The FT reported: “While there is broad sympathy for the protests and questions about whether it is possible to overthrow the Islamic republic, many people fear losing their jobs amid uncertainty over the direction of the protests, which are largely leaderless and unorganised. Some eye nearby Syria and Afghanistan and worry that Iran could become engulfed in chaos.”

In Tehran’s Grand Bazaar, some businesses shut their shops last week. “There was a mixed reaction in the bazaar, with some voluntarily shutting shops and others fearing being attacked by protesters,” one businessman in the traditional market told the UK daily. “We still cannot say the bazaar has staged a strike, but what they did has symbolic importance that the bazaar has shown its support for the protests.”

Apart from some instances of isolated labour protest, workers in the economically crucial oil, gas and petrochemical sectors of Iran have yet to strike. More than 200,000 people work in the oil sector alone.