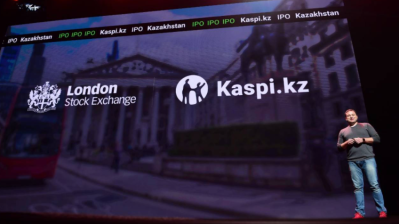 Kaspi's enjoyed a mighty splash on the markets that many investors didn't see coming. / kaspi.kz
By Kanat Shaku in Almaty October 16, 2020

Kazakh fintech firm Kaspi.kz’s billion-dollar initial public offering (IPO) on the London Stock Exchange (LSE) came as a big surprise to many international investors. But that in itself was hardly surprising given how little is known abroad about Kazakhstan’s fintech market. Even less, of course, is known about the wider Central Asian fintech market. So let’s try and fill in some gaps.

A report by the Astana International Financial Center (AIFC), published in June and titled “The State of Fintech in Central Asia: How Kazakhstan Drives the Regional Fintech Industry”, is one document that can help us do that.

The study notes that in Central Asia, a region with a population of more than 74mn, some 55.2% of people live in rural areas with poor financial inclusion. Half of the adult population in Central Asia has no access to banking services, though banking penetration has been gradually rising.

A taste of Kaspi's local advertising.

Kaspi.kz, which plans on expanding beyond the territory of Kazakhstan (population: 19mn), already boasts a 7.8mn user-strong consumer app, the Super App (though Kazakhs generally simply refer to it as the “Kaspi app”), and faces barely any competition. As the app offers bill payments, loans, peer-to-peer payments, an online marketplace and a personal finance management tool, Kaspi is quickly turning into Kazakhstan’s de facto payment system, with both retailers and consumers preferring to use transfers via the app as an alternative to cash.

Central Asia’s growing population, access to the internet and banking penetration potential can thus be seen as delivering a market ripe for the taking by Kaspi and any similar apps that manage to muscle their way into the pictur.

The AIFC’s report, meanwhile, lists a lack of trust in financial institutions, the high costs of financial services, poor financial infrastructure and restrictive regulations on banking products among the barriers to financial inclusion.

The study adds that the “large unbanked population” of Central Asia provides an opportunity for fintech to fill the void when it comes to a lack of affordable financial services.

Central Asia’s average internet penetration rate was estimated at 49% in 2019, while penetration in Kazakhstan stands at 79%, the AIFC points out. This leaves much more room for growth. Banks in the region are naturally expanding into mobile and internet banking in order to provide greater financial access in remote and rural areas. Kaspi.kz itself owns the third largest bank in Kazakhstan, Kaspi Bank. The access to the Kaspi app is automatically granted to clients who hold their money at the bank and take a Kaspi Gold bank card.

Mobile access in Central Asia averages 60% with Kazakhstan, the region’s biggest economy by far (with economic output of around $180bn it outstrips Uzbekistan by about three and a half times), accounting for much of that. The volume of digital payments in Kazakhstan in 2019 grew 2.3-fold to $34.9bn partly driven by the market entries of Apple Pay and Samsung Pay, along with the promotion of cashless payment bonuses and cashback—the Kaspi app’s rapid rise accounts for some of this ongoing growth. After all, in the first half of 2020, amid the coronavirus (COVID-19) lockdowns, Kaspi managed to raise its net income by 50% to Kazakhstani tenge (KZT) 115.6bn (€232.13mn).

Thus, it is the region’s low access to the formal financial sector coupled with rapidly growing mobile and internet usage that is allowing fintech companies in the region to swiftly fill the gap, the report adds.

Kazakhstan currently controls the region’s  largest e-commerce market at a size of $2.14bn. It is followed by Uzbekistan ($643mn), though given Uzbekistan’s population of 33mn—Central Asia’s largest—there is room there for a larger market. Kyrgyzstan’s e-commerce market amounts to $162.8mn, while there are the much smaller markets of Tajikistan ($54.7mn) and Turkmenistan ($81.5mn).

Citing the Agency for Regulation and Development of the Financial Market of the Republic of Kazakhstan, AIFC points out that the payments segment has been the most popular fintech segment in the country, listing electronic wallets (e-wallets), sometimes linked to cards and mobile phones, that are used for cashless payments, bills, money transfers and making deposits. The Kaspi app covers all of these categories and more.

Kaspi’s main local competitor in the payments segment includes Qiwi, an e-wallet service that rose to prominence over the last few years though the Kaspi e-wallet, which automatically links to Kaspi Bank accounts via the Kaspi app, holds an advantage thanks to the bouquet of other services offered by the app.

The Rating Agency of the Regional Financial Center of Almaty said in 2018 that 41% of Kazakh fintech companies operated in the payments segment and 24% operated in microlending.

Some of the fintech startups in the country are Ules, a peer-to-peer (P2P) lending platform, Smart Pay, a payments solution for small and medium sized businesses, one of the largest online micro-loan providers Kredit24 and financial price comparison site Prodengi.

The AIFC itself launched an IT hub in Nur-Sultan in 2018 with the goal of boosting regional IT startups.

UK-based Paysend says it wants to help put Belgrade on the map as the next fintech capital of Europe.