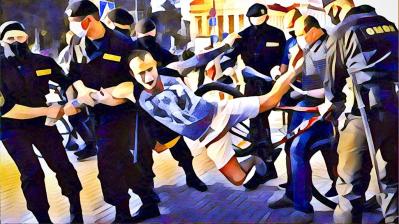 Belarusian riot police have been making heavy use of flashbangs that have been imported illegally from Czechia / wiki
By bne IntelliNews August 11, 2020

Russian publication Life.ru published a review of the weapons and equipment in the Belarusian riot police’s arsenal. Some of the materiel is getting its first use as Minsk is gripped by the biggest mass protests since independence in 1991.

Using violence against angry crowds is difficult. On the one hand you want to be able to hurt people and force them off the streets. On the other you don't want to kill the protesters and be accused of a massacre.

The OMON – the Russian acronym for Special Purpose Mobile Unit – are the shock troops of the government used dealing with protests and riots and Russia also uses OMON in the same way.

Lukashenko is reported to only have a few thousand of these elite forces and has been forced to supplement the current crowd control efforts with the specialist Alpha units of the KGB and regularly military personal.

The average salary of the OMON rank and file is from BYN900 – plus additional payments for overtime shifts and unscheduled duty – to about BYN1300 ($500) per month. The salaries of senior executives from major and above start at BYN3,000 ($1,200).

The salaries of rank and file personnel and management in special-purpose units, including the KGB, have not been disclosed, but Life journalists estimate they are another 15%-20% higher than the regular OMON troops. 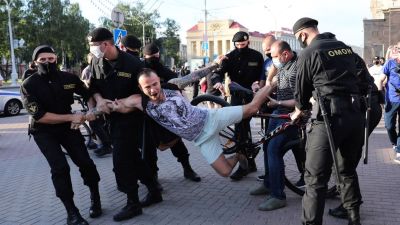 The Belarusian police have already been widely firing “rubber bullets” at protesters. But the projectiles are not actually made out of rubber, but are orange wooden bomb-shaped projectiles that are considered very dangerous. They can take an eye out and even break bones. And a headshot at close range can kill. 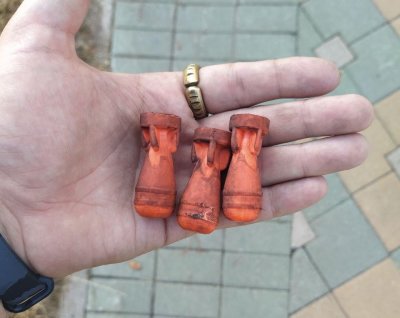 The most visible weapon police have been using in the first two days of protests is the stun grenade, or flashbang, that goes off with a thunderclap that is 150dB loud.

However, these grenades are the Zasahová výbuška P1 – the name of the grenade is clearly legible on photos of spent cases published online – which are manufactured in Czechia.

Currently there is an arms embargo against supplying Belarusian republican security forces with these armaments, so their import has been illegal. Following the end of the protests an investigation into how the Belarusian security forces got their hands on these grenades will almost certainly be launched.

The loud explosions are designed to intimidate crowds, but the explosive power of one of this grenades is considerable. One victim in the first night of clashes had part of his foot blown off by a grenade that exploded next to his shoe. 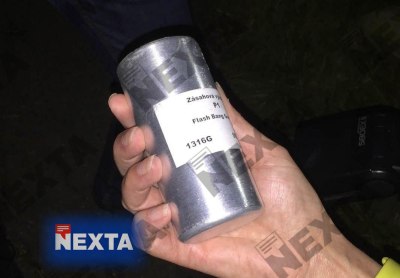 Experts say the safest and most effective weapon against crowds is the high-powered water cannon pumping water at 12 atmospheres that can knock a protestor off their feet, but carries little risk of doing any permanent or significant injury.

The police in Minsk have several hundred domestically produced trucks mounted with water cannons. The “ACS-40 Tsunami specials” were made at the Minsk Automobile Plant (MAZ), better known for making giant mining trucks. These water cannon trucks were made over the last decade, but they have never been used against the population before this week. 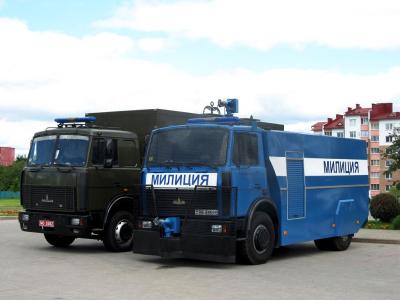 In addition to the home-grown MAZ trucks the government has imported several specialised foreign-made vehicles. Among them is the Predator all-wheel drive truck, built by Streit Group in the United Arab Emirates on the basis of the Iveco medium-duty truck. This machine is equipped with an autonomous water supply system with two water jets made by the German firm Ziegler that shoots a jet of water at 20 atmospheres and can hit a target 70m away. Used at closer range, the pressure of the water is so high it can cause severe injury.

In addition, these vehicles have retractable blades on the front that can cut through street barricades made of concrete blocks and were used on the night of August 10 to destroy barricades being erected near the Universam Riga shopping mall.

The police also have a number of imported armoured cars that can withstand shots by 7.62x51 mm bullets and grenade fragments.

The elite Alpha forces of the KGB have bought around 400 Chinese-made Humvee rip-offs – the Dongfeng EQ2058 Mengshi – that were deployed on the roads leading into Minsk in the run-up to election day. 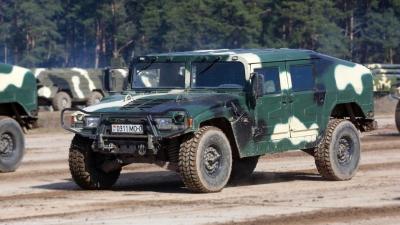 The special forces of the police and the KGB have Ford SUVs with a "spetsnaz" bulletproof transport ramp mounted on the roof, known as the Mobile Adjustable Ramp System (MARS) and are manufactured by the Dutch company Apex Global. The ramp is protected by bullet-proof plating and can be used as an observation post or "prompt entry into the premises” which were deployed on August 10. 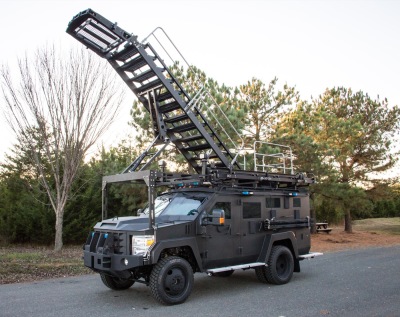 Belarus’ special forces soldiers are issued with Heckler & Koch MP5 assault rifles made in the US and cost about $2,000 each. And they are also given a Glock 19 pistol that cost another $800 per unit.

The birth of a Kazakh banking empire: ATF Bank
17 hours ago
CEPR's action plan for Ukraine's wartime economy
1 day ago
Missiles or sabotage: What caused the explosion at the Russian airbase in Crimea?
4 days ago
Population decline to take Emerging Europe back to the early 20th century
4 days ago
Czech government remains colour blind on green issues
4 days ago