Western nations step up pressure on Belarus amid election crackdown 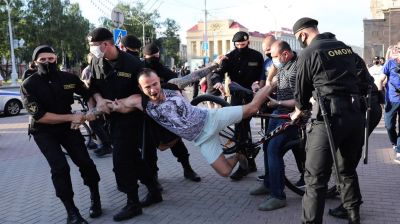 The embassies of United States and United Kingdom in Minsk have slammed the Belarusian authorities for the June 19 crackdown on protesters, while the European Union has urged Minsk to release recently detained Viktor Babariko, an outspoken critic of Belarusian authoritarian President Alexandr Lukashenko.

"The detention of large numbers of journalists and peaceful protesters across Belarus this evening is unacceptable," the UK embassy in Minsk tweeted on June 19. "The UK urges the government of Belarus to respect the rights of freedom of expression and assembly, and to release those who have been arbitrarily detained."

The US has urged the Belarusian government "to uphold its international commitments to respect fundamental freedoms by allowing the Belarusian people to freely, peacefully assemble and releasing those detained, including journalists covering tonight's peaceful gathering," according to the US embassy’s tweet.

Around 150 protesters and journalists were briefly detained in Minsk and several dozens opposition activists in other major Belarusian cities in the evening of June 19 during spontaneous street protests against Lukashenko's rule. Several dozen protesters were also detained in other major Belarusian cities, specifically, regional centres Brest, Mogilev and Vitebsk.

Meanwhile, on June 19 the EU urged Minsk "to immediately release" banker-turned-politician Babariko, detained earlier this week, "and to guarantee full respect of the rule of law, including a fair and transparent investigation and the right to have access to a lawyer. Any investigation must be impartial and without political pressure".

On June 18, Babariko was taken in for questioning by officers of the Department for Financial Investigations at Belarusian State Control Committee (SCC). Later the same day, the SCC confirmed his detention over the investigation of his "illegal [financial] activities".

According to the SCC, around a dozen employees of Belgazprombank have also been arrested, and some of the suspects have allegedly "confessed" that they had illegally transferred hundreds of millions of dollars to Latvia via a scheme organised by Babariko.

Babariko collected 425,000 ballot signatures as of June 18, which is a record-high number for Lukashenko's rivals over the past two and a half decades. The necessary minimum is 100,000 signatures.

"The Belarusian authorities must respect fundamental freedoms and human rights, in line with Belarus’ international commitments. They must refrain from any restrictions of the rights of potential candidates, avoid any detentions of peaceful protesters, and immediately release all arbitrarily detained activists. Reported cases of ill-treatment of persons detained for their involvement in peaceful protests, including Pavel Severinets, are extremely worrying," the European Commission’s spokesman said in a statement on June 19.

The EU also expects Belarus to officially invite the OSCE/ODIHR to monitor the elections as soon as possible.

"Safe, peaceful, free and fair elections will foster democratic development in Belarus, reinforce its sovereignty and independence, and pave the way for greater co-operation with the EU and economic prosperity for the Belarusian people."