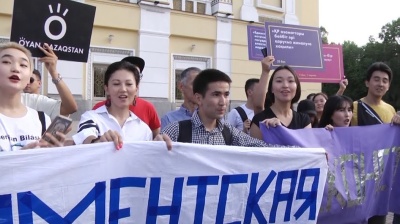 Under a new relaxation of the rules on dissent, officials tolerated this rally of the Wake Up, Kazakhstan youth movement in Almaty at the end of August. / YouTube.
By bne IntelliNews September 5, 2019

Kazakhstan’s new president Kassym-Zhomart Tokayev is facing a dilemma in how to deal with an upsurge in anti-China sentiment across the country.

September 4 brought the third consecutive day of demonstrations against aspects of Kazahkstan’s growing investment reliance on Beijing. The protests started out with just 100 people taking to the streets in the oil mining town of Zhanaozen. But they have spread to other towns and cities. On September 3 and 4, protests were also held in Aqtobe, Almaty, Shymkent and the capital Nur-Sultan, albeit with much smaller numbers than were seen in Zhanaozen. The group of protesters in commercial and cultural capital Almaty, who protested outside the city government headquarters, numbered just 30, for example.

The protesters are urging the Kazakh government to cease accepting loans from China. They are also challenging the official plan to construct 55 industrial facilities with Chinese assistance and are demanding Tokayev scrap his upcoming September 11 visit to China.

Although the demands of the protesters are unlikely to be met, the rallies reflect wider ongoing anti-China sentiments, which have long been seen with ordinary Kazakhs, who typically see China as an economically invasive force.

Sentiments exacerbated by Xinjiang “re-education camps”
These sentiments have been exacerbated in the past year by constant news of China’s so-called “re-education camps”, said to hold thousands of ethnic-Kazakh citizens of China in Xinjiang, along with an estimated one million ethnic Uyghurs and other mostly Muslim Turkic-speaking indigenous people. The land reform protests of 2016 were also partly directed at China over frustrations that the Kazakh government is continually handing over land to the big neighbour.

Fears of an excessive reliance on China’s investments and the spread of corruption that comes with it are part of the larger issue of ordinary Kazakh citizens seldom seeing the benefit of foreign investment. Critics say major investments in the country fail to deliver gains for most of Kazakhstan’s 18mn people.

Zhanaozen is known as the town where Kazakh authorities in December 2011 violently suppressed protests by oil workers as police opened fire at a rallying crowd—16 people were shot dead, while possibly hundreds were injured.

The demonstrations in Zhanaozen have invoked the events while decrying Chinese money and demanding a complete revamp of Kazakhstan's power structures.

During the run-up to what was widely seen as a sham presidential election in June, Tokayev, who succeeded long-time president Nursultan Nazarbayev as the shoo-in candidate, faced an outbreak of pro-democracy demonstrations that led to thousands of arrests. International observers said the poll was undermined by irregularities as well as "scant respect for democratic standards."

Lately, the government decided to ease pressure on dissent by allowing peaceful small-scale public protests against the government, such as a rally in Almaty on August 30 organised by the Wake Up, Kazakhstan youth movement. Anti-Tokayev  protests in Almaty were held last week without any interference from law enforcement authorities for the first time ever in independent Kazakhstan.