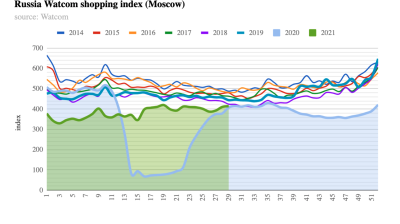 Russia's Watcom Shopping Index has made back almost all the ground lost and reached 2019 levels, the last year of strong growth, on the back of rising real incomes. / bne IntelliNews
By bne IntelliNews August 3, 2021

The index, which shows what is going on in Russia’s leading shopping venues in real time, reached 414 in week 29 of this year (July 19-25), ahead of the 408 the index scored in the same week in 2020 but slightly behind the 444 the index posted in the same week of 2019, the last year of strong economic growth.

The week 29 result is only 1.5% down on the result from 2019. Last year retail sales soared after the lockdown imposed by the City government was removed and Muscovites flooded back into the stores. The bounce-back last year saw shopping levels recover to almost pre-pandemic levels; however, the volume of foot traffic began to fade again in the autumn as a second wave of the pandemic struck and residents began to self-isolate again in the latter part of the year.

This year foot traffic has recovered somewhat, but it has remained between 20% and 27% less than in 2019. In general foot traffic at Moscow malls has fallen from the highs set in 2014 when the Watcom index was founded thanks to the development of Russian retail giving shoppers more choice of venue and the rapid growth of e-commerce.

Russian consumers are under pressure after seven years of declining real incomes, but the outlook for this year has improved after real income growth went back into the black in July.

Real disposable income in Russia in 2Q21 increased by 6.8% year on year after a 3.7% decline seen in 1Q21, according to the latest data from Rosstat statistics agency.

As followed by bne IntelliNews, most recently the Ministry of Economic Development improved its outlook on income growth. At the same time, analysts suggested that recovering incomes could support GDP recovery through consumption amid waning contribution of lockdown savings and higher interest rates.

The low base effect was expected to give a bump to income dynamics in 2Q21. As a result, in 1H21 overall real disposable income went up by 1.7% y/y. The Ministry of Economic Development expects the indicator to rise by 3% in 2021.