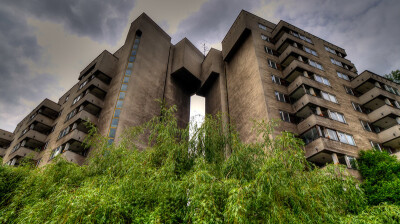 The 'Szpiegowo' building is on the registry of historic buildings as an example of post-war modernist architecture. / Pic by Martin, licensed under CC BY-NC 2.0
By Wojciech Kosc in Warsaw April 12, 2022

A bailiff working for the Warsaw town hall took over a building once used by the Russian embassy to house diplomats, it emerged on April 11.

The huge residential complex, built in the late 1970s and nicknamed “Szpiegowo” (“Spy town”), has stood empty since the collapse of the Soviet Union with Russia refusing to hand it over.

Poland terminated the building’s lease contract in 2008 and has been issuing the Russia embassy invoices for rent since – which the Russian side never paid.

Warsaw authorities now hope to renovate the complex and use it to help Ukrainian refugees in the capital. Since the war broke out on February 24, Warsaw, a city of 1.7mn, has welcomed around 300,000 Ukrainian fleeing war in their home country.

“In view of the Russian aggression against Ukraine, I decided to arrange apartments there for the needs of Ukrainian families with children,” Warsaw Mayor Rafal Trzaskowski said on Twitter in March when paperwork to carry out the official takeover of the building was still underway.

“I submitted a note to the Ministry of Foreign Affairs, expressing interest in the long-term lease of this building. It will definitely serve Ukraine and Ukrainians. Maybe there will be a school, maybe a kindergarten, maybe apartments,” Ukraine’s Ambassador to Poland Andriy Deshchytsia, who was present at the takeover, said.

It was not clear, however, if the long-disused building was even suitable for carrying out renovation or if it would be cheaper to demolish it and re-develop the land from scratch.

But any work in the building will be made extra complicated since it is in the registry of historic buildings as an example of post-war modernist architecture.

The Russian embassy in Poland said that the takeover of the building meant that it was now "occupied" by Poland.

Poland's ministry of foreign affairs said that it was "pleased" with the takeover.

NEMETHY: Is the world heading towards a “polycrisis”?
Polish factories remain in downturn mode in September
Poland’s inflation unrestrained in September at 17.2%, flash estimate shows