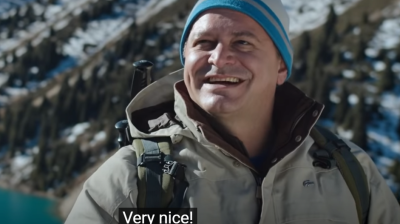 Kazakhstan has, for the first time ever, embraced the character of Borat. In the wake of the release of the Borat 2 film ("Borat Subsequent Moviefilm", the sequel to "Borat: Cultural Learnings of America for Make Benefit Glorious Nation of Kazakhstan"), it has started using one of the most popular Borat catchphrases, "Very nice!" in official tourism advertising, AV Club reported.

Kazakhstan’s officials have till now not been the biggest fans of Sacha Baron Cohen's Borat character, who is depicted in an extremely satirical and deliberately provocative way, depicting his fictional homeland as misogynistic, homophobic and anti-Semitic.

"In COVID times, when tourism spending is on hold, it was good to see the country mentioned in the media," Kazakhstan Tourism board deputy chairman, Kairat Sadvakassov, told The New York Times. "Not in the nicest way, but it's good to be out there."

Sadvakassov added in a statement to the Huffington Post that adopting Borat’s catchphrase in the campaign “offers the perfect description of Kazakhstan’s vast tourism potential in a short, memorable way.”

“Kazakhstan’s nature is very nice; its food is very nice; and its people, despite Borat’s jokes to the contrary, are some of the nicest in the world. We would like everyone to come experience Kazakhstan for themselves by visiting our country in 2021 and beyond, so that they can see that Borat’s homeland is nicer than they may have heard,” he said.

The idea for the campaign came from American Dennis Keen, who travelled to the country on a high school exchange, then studied with a Kazakh professor at Stanford University. He now lives in Almaty, where he gives walking tours, according to the New York Times. Keen reportedly pitched the idea to the Kazakh tourism board and “immediately” got the go-ahead to make some ads.

After the approval of the slogan was secured, four short ads highlighting the country's culture and destinations were launched, each using the "Very nice!" catchphrase. The ads show tourists hiking with a selfie stick, (“Very nice!”), drinking fermented horse milk (“Mmm, that’s actually very nice!”), marvelling at the architecture (“Wow, very nice!”) and posing for a photograph with Kazakhs in traditional dress (“That’s very nice!”).

Some Kazakh citizens have expressed outrage at Borat 2, prompting Kazakhstan’s Ministry of Foreign Affairs to respond to the anger. The ministry said the movie was a commercial project that intentionally provokes protest from Kazakh citizens for the purpose of self-promotion. Some Kazakhs demanded a ban on the movie.

"The people of Kazakhstan and its state symbols are mocked for provocation purposes. The noted protest is meaningless as it has no recipient. The more outrage it gets, the more profit the film creators get. Gaining superprofits pushes the authors to continue the movie. In fact, the film has a clear form of racism and xenophobia. Our citizens are outraged by explicit racist remarks for a reason," the ministry’s statement added.

The first Borat film’s version of the Kazakhstan national anthem begins with the words: “Kazakhstan greatest country in the world, all other countries run by little girls.” (The true anthem begins: “Sky of golden sun, steppe of golden seed”.)

After the release of the first Borat film in 2006, the Kazakh government placed ads in US newspapers taking issue with some of the film’s claims. The ads also represented the country as modern, stable and outward-looking. The advertisements coincided with a visit to the US from then Kazakh president Nursultan Nazarbayev.

Later in 2006, Nazarbayev chuckled when asked about the film while on a visit to the UK. “The very fact that you have put that question – you will want to learn more and come to Kazakhstan to see for yourself,” he said.