Uzmetkombinat – one of Uzbekistan’s blue-chip companies 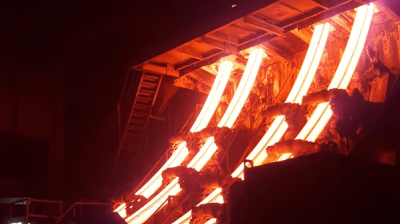 UZMK has an annual production capacity of 1mn tonnes of steel and is investing €600mn in expanding its capacity.
By Scott Osheroff of AFC Capital in Tashkent November 1, 2021

Uzbekistan’s business environment is evolving in a free market direction but there is certainly not an entirely free market in the country as yet, nor should there be. The Central Asian country has the largest industrial base of any former “Soviet Satellite”, thus Uzbekistan’s previous and current president have been wise to focus on protecting and nurturing its domestic manufacturing sector. This certainly applies to Uzmetkombinat (UZMK), currently the AFC Uzbekistan Fund’s second-largest position.

UZMK has an annual production capacity of 1mn tonnes of steel, produced using electric arc furnaces to melt scrap steel collected in Uzbekistan, as well as imported crude steel from Russia and Kazakhstan. The company benefits from its monopoly position in the collection of scrap steel in Uzbekistan, as the country officially bans exports of any scrap. This gives UZMK a competitive advantage in purchasing scrap at a price it sets and one which is well below international scrap steel rates. As the government of Uzbekistan imposes an import duty on steel products, steel prices in the country are higher than abroad, thus allowing UZMK to benefit from significant margin when selling its steel locally – a core focus of the company as Uzbekistan remains a net importer of steel, mainly from China, Russia, Iran and Kazakhstan.

With steel demand continuing to rise in Uzbekistan, UZMK is currently undergoing a €600mn capacity expansion which will see steel production increase from 1mn tonnes per year to 2.5mn tpy by 2026, subsequently cutting steel imports and further cementing UZMK’s grasp on the local steel market.

UZMK’s expansion consists of modernisation of its current German production lines, which will raise capacity by 300 kilotonnes per year, the construction of a 1mn tpy hot rolled coil line (this is already underway) and the purchase of a small steel factory in a nearby city with annual production capacity of 200ktpy. This expansion will use mostly Italian equipment, contrary to the common stereotype that such a company in such a frontier market would default to Russian or Chinese equipment. The capital for this project will come from various sources – a locally syndicated loan for $100mn and several other loans from international banks at favourable rates, while a portion of the project will be financed from cash on hand. 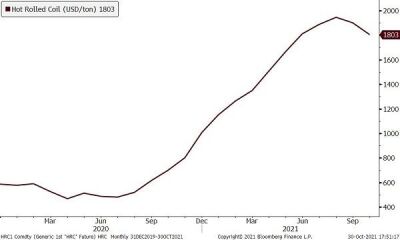 One of the risks with such a project is the large debt UZMK will be taking on. However, while the company may cut its dividend for a year or two, the medium-term outlook is very bright. For example, a downstream steel plant, the Tashkent Metallurgical Plant, located on the outskirts of Uzbekistan’s capital, Tashkent, is currently importing roughly 1mn tpy of hot rolled coil. Once UZMK has completed its new production line, anticipated in 2023, it has a guaranteed buyer, as UZMK will be able to undercut imported hot rolled coil courtesy of Uzbekistan’s import duties, thereby rendering Russian steel uncompetitive.

UZMK has returned over 1,100% from our initial investment in the company, before dividends, and we remain upbeat due to its monopolistic position and benefitting from Uzbekistan’s focus on import substitution. This has led trailing-twelve months earnings to soar 547% year on year, while the book value per share has surged 62% y/y. Compared to most similar companies recycling scrap steel abroad, UZMK has a strong moat as it controls its raw materials costs, while foreign companies are subject to paying the market price for scrap steel. The company ended October trading at a P/E of 4.01x, P/B of 1.79x and hosts a dividend yield of 3.34%.

Going forward, while steel prices will surely not rise the way they have over the past year, we believe a transition is occurring where China, the world’s largest steel producer, is struggling with energy shortages and pollution curbs, thereby eliminating many tax rebates on exported steel to engineer an end to overproduction. This should bolster international steel prices over the coming years and put UZMK in an enviable position as it moves yet closer to bringing its new capacity additions online.

Lastly, as UZMK puts the finishing touches on its capacity expansion and accelerates its debt repayments, this should coincide with an international dual listing, likely on the London Stock Exchange, in 2024 or 2025, which will provide foreign investors exposure to one of the most attractive blue-chips in Uzbekistan today.