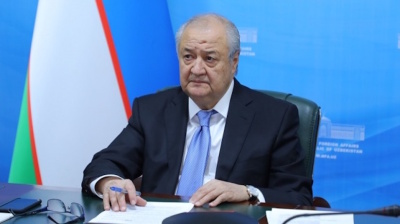 Uzbekistan has become the first former Soviet Central Asian country to properly distance itself from Russia's invasion of Ukraine. It says it insists on Ukraine's territorial integrity and will not recognise Russia's puppet republics in Luhansk and Donetsk.

"Uzbekistan recognises the independence, sovereignty and territorial integrity of Ukraine. We have not recognised the Luhansk and Donetsk People's Republics," Foreign Minister Abdulaziz Kamilov stressed as he addressed a Senate session on March 17.

"First, the situation around Ukraine causes serious concern in Uzbekistan. Secondly, we are in favour of finding a peaceful solution to this situation and resolving the conflict by political and diplomatic means. But for this, first of all, it is necessary to immediately stop military actions, violence," Kamilov said.

"Uzbekistan has historically had traditional comprehensive ties with both Russia and Ukraine. We will continue mutually beneficial co-operation with these two countries based on our national interests. On the one hand, Russia is a leading trade partner of Uzbekistan, we have a strategic partnership and allied relations with it. On the other hand, we co-operate with Ukraine in many areas, including trade, economic, cultural, educational, agricultural spheres," the foreign minister stressed.

"Last year, the trade turnover with Ukraine exceeded $704mn, which is 60% more than in 2020. Co-operation for the current year included a plan of various events in Tashkent and Ukraine. In 2021, air traffic between Tashkent and Kiev was resumed, four flights were carried out every week," the minister added.

He noted that Uzbekistan would continue the provision of humanitarian assistance to Ukraine in this difficult situation.

Kamilov also recalled: "According to the foreign policy concept, Uzbekistan does not participate in any military-political blocs, and our servicemen are not involved in military conflicts abroad. This is provided for by a law approved by parliament."

Earlier, on March 14,  on the sidelines of the second Diplomatic Forum in Antalya (Turkey), the minister had said that Uzbekistan was very concerned about the situation in Ukraine. "We can talk a lot about it. But, like many people in the world, we want an end to violence and a solution to all problems by political and diplomatic means."