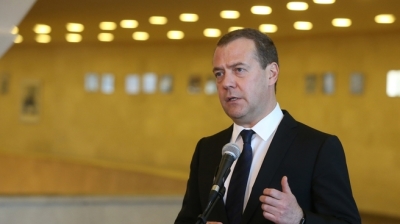 Russia’s Prime Minister Dmitry Medvedev has announced that his government has submitted its resignation in what is likely the first step in Putin’s preparations for a succession.

The announcement came within an hour of Russian President Vladimir Putin’s state of the nation speech where he announced his intention to change the constitution and shift more power to the parliament.

In what looks like a coordinated piece of political theatre, Medvedev said that he thought it was “appropriate” to leave after Putin announced changes to the constitution that would have given Medvedev a lot more power.

"After those amendments are adopted — and it was said that this is likely to be done following discussion — there will be significant changes not only to a variety of constitution articles, but to the balance of power, namely to the executive, legislative and judicial branches of power," the prime minister said at a Cabinet meeting immediately after Putin’s speech.

"In this context, it is evident that we, as the government of the Russian Federation, should provide our country’s president with an opportunity to take all the necessary decisions in these conditions. I believe it right for the government of the Russian Federation to step down in conformity with Article 117 of Russia’s Constitution," Medvedev added.

Medvedev leaves to become the deputy head of the security council, which is a key Russian institution but has seen its importance wax and wane over the years.

Putin thanked Medvedev’s government for its work. "For my part, I also want to thank you for everything that was done at this stage of our joint work, I want to express satisfaction with the results that have been achieved," the president told a meeting with the cabinet of ministers.

"Not everything was done, but everything never works out in full," Putin said, echoing the famous quote from former prime minister Viktor Chernomyrdin: “We try for the best, but things work out as they always do.”

The Russian leader noted that soon he planned to meet with all ministers of Medvedev’s government. "I will meet with each of you," Putin assured them.

Medvedev has remained a loyal Putin supporter and his weakness as a prime minister who failed to exercise the considerable political power that comes with the office under the constitution handed political control of the country to Putin and the presidential administration. In contrast, in the 1990s even after then president Boris Yeltsin changed the constitution in the president’s favour, he spent much of his time battling the Duma, which was then dominated by the Communist Party. Medvedev’s docility has been a key element of Putin’s control over Russian parliamentary politics for all of his three terms in office.

“Medvedev had long gone past his sell by date. Attempt by Putin to refresh the government, more focus on reform and delivering growth and improving living standards. Let’s see who is PM - my bet would be Oreshkin,” Tim Ash, senior sovereign strategist at BlueBay Asset Management, said in a tweet, refering to Minister of Economy Maxim Oreshkin.

The question of who takes over will be crucial as the new PM will exercise real power. Russia-watchers are split into two camps of those that think Putin will pick a younger man from the post-Soviet generation to take over, like Oreshkin, who is a liberal economist, and those that believe Putin will favour one of the established old guard such as former finance minister Alexei Kudrin or current defence minister Sergei Shoigu, who are the top picks for the job.

The international reaction will be muted until a new prime minister is announced, but clearly Putin’s break with the structure he has used for two decade offer the possibility of selling these changes as a fresh start – both in domestic politics and in the international arena.

Russia was riven by a series of popular protests over the summer and while Putin remains personally popular, the average Russian is feeling beaten down by almost six years of declining real incomes. On top of that the population is maturing politically. The issue that inflamed the most virulent and effective protests were related to landfill and waste management. In several regions protestors forced the authorities to back down.

At a national level the popularity of the ruling United Russia is fading too. The party has its lowest ever popularity rating of 35% and it will not be able to hold on to its majority in the next general election. Putin himself acknowledge the same in his speech the same morning, saying that the “the people are maturing.”

The change is also an opportunity to mend fences with Europe. relations between Moscow have warmed notably with both Paris and Berlin in the last year and French President Emmanuel Macron has even called for a rest. Macron has become heavily involved in mediating the talks between Moscow and Kyiv that came to a head at the Normandy Four meeting in Paris on December 9.

Merkel and Putin have a much longer relationship, but they have also moved visibly closer in recent months. Merkel was at the Paris meeting too, but she and Putin have become partners to try and keep the peace in Libya. Berlin will host an important Libyan peace conference in Berlin on January 19, but has been coordinating closely with Moscow, including an impromptu visit to Moscow by Merkel last weekend to discuss the situation in the Middle East.

With the end of his long term in office in sight Putin must be starting to think about his legacy. Russia has been mired in  multiple conflicts with the international community, but as a result of these Putin has built a fiscal fortress that has made the economy immune to sanctions. He has prevented Ukraine from sliding into the west’s embrace and halted Nato’s western expansion. And he has re-established Russia an important player in international geopolitics, especially in the Middle East. Putin himself admits that Russia is unlikely to be friends with the west again but says he still hopes for a relationship of “tolerant cooperation.”