Ukrainian President Zelenskiy would win a presidential election tomorrow, but his SOTP would come in third 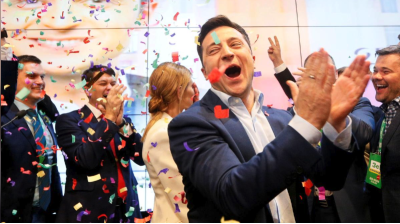 Ukrainian President Volodymyr Zelenskiy would win a third of the votes if a presidential election were held on Sunday, but the ruling Servant of the People (SOTP) would be third with 18.7% of the vote / wiki
By bne IntelliNews November 12, 2020

A study by Kyiv International Institute of Sociology (KIIS) released on November 11 showed that the ruling Servant of the People (SOTP) would come in third if parliamentary elections were held this Sunday but Ukrainian President Volodymyr Zelenskiy would still win a presidential election.

Zelenskiy remains Ukraine’s most popular politician but has seen his lead fall steadily from the 72% with which he won the April 2019 presidential election to 40.9% he held in April this year to the current 33.3%. The people are losing faith in him, but haven’t given up on him entirely.

The situation with party politics is very different.

SOTP has been breaking up since it won an absolutely majority in the July 2019 parliamentary elections with 56% of the vote. Several of its deputies have since defected to other blocs and some 30 deputies in the SOTP bloc are reported to be under the control of oligarch Ihor Kolomoisky, with whom Zelenskiy seems to have broken.

However, voters have largely kept their Western orientation, although the level of support remains highly dependent on which part of the country. In general, those Ukrainians living in the western part of Ukraine are more pro-EU whereas those in the eastern provinces are more pro-Russian.

Overall, 49% support membership with the EU, whereas support for joining the EU hits a high of 69% in western Ukriane. Joining the Russian-lead rival economic club, the Eurasia Economic Union (EEU), found only 13.8% support overall, but that rose to a still modest 31.5% in the government-controlled parts of the disputed Donbas region and 27% in the non-aligned regions, according to KIIS.

While Poroshenko has made membership of the EU a core part of his European Solidarity Party’s message, Zelenskiy supporters also overwhelmingly support closer ties with the EU.

If a country joins the EU then typically a few years later it joins the NATO military alliance. Following the Orange Revolution in 2006 membership of NATO was not an agenda item and the Orange leadership team tended to steer away from the topic as it remained a divisive issue for a population where the elder generation grew up being told NATO was the enemy. However, since the war in Donbas started possible NATO membership for Ukraine has gained widespread, if not overwhelming, acceptance. KIIS found that 41% would like Ukraine to join NATO (54.6% in western Ukraine) versus 13% that would prefer to join the Russian-lead rival Collective Security Treat Organisation (CSTO), rising to 27.6% in government-controlled Donbas region and 37.1% in the non-alligned regions.

The issue of NATO membership remains divisive, with Poroshenko’s supporters committed to NATO membership while the pro-Russian For Life Party headed by Medvedchuk overwhelmingly support membership of the CTSO.

While the allegiances of Ukraine have not changed that much, the population’s disappointment with their government continues to mount. The share of respondents that think the country is stagnating was up to 55.1%, according to the KIIS study from 46% in April.