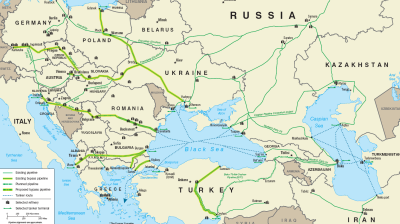 This oil pipelines map from the US Department of Energy shows how vessels must negotiate Turkish straits to access the Black Sea. / US Dept of Energy, public domain.
By bne IntelIiNews February 24, 2022

Vasyl Bodnar told Reuters that Ukraine viewed the presence of Russian warships near its borders in the Black Sea as a threat and would ask Turkey to contemplate barring passage through the Dardanelles and Bosporus waterways. Ankara’s agreement for such a closure seems unlikely to be obtainable given how Turkey—which has said it is opposed in principle to using sanctions against Russia in the Ukraine crisis—is involved in a delicate balancing act, trying to retain good relations with both the Russians and the Ukrainians. It might anyway come too late given how six Russian warships and a submarine earlier this month sailed through the straits to the Black Sea for what Moscow described as naval drills near Ukraine waters.

Nevertheless, Bodnar was quoted as saying: "We believe that, in case of a wide military invasion or the starting of military activities against Ukraine—when the war becomes not only de facto but de jure—we will ask the Turkish government to consider the possibility of closing the Black Sea straits for the aggressor state."

Under the 1936 Montreux Convention, Nato member Turkey has control over the Bosporus and Dardanelles straits, linking the Mediterranean and Black Sea. The pact gives Ankara the right to regulate the transit of naval warships and to close the straits to foreign warships during wartime and when Turkey is threatened.

Turkish broadcaster NTV reported that Erdogan, speaking to reporters on February 23 during a flight back to Turkey from an African tour, said: “It is not possible for us to abandon either [Russia or Ukraine].

“Our aim is that we take such a step that, God willing, we sort this [crisis] out without abandoning either one.”

He called on Moscow and Kyiv to resume negotiations and said Nato needed to “determine its stance” after a summit that was due to take place on February 23.

First official results from Bosnian elections put nationalists ahead after exit polls predicted losses
21 hours ago
Georgian MPs want to rid the country of oligarchs, but not all of them
21 hours ago
Hungary agrees on deferred payments with Gazprom for winter gas deliveries
21 hours ago
US sanctions Russia’s CBR head Nabiullina and other officials
21 hours ago
Russia prepares for new attacks against Ukraine from Belarusian territory
21 hours ago