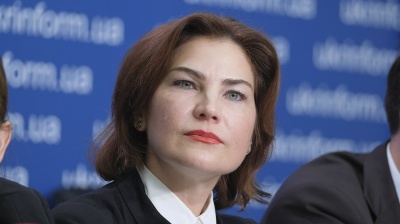 Ukraine’s partners are worried about the deteriorating commitment of the Zelenskiy administration to the rule of law and judicial reform and the increasingly politically motivated actions of the president's recently appointed General Prosecutor, Iryna Venedyktova.

“In most countries, judges take on the mafia,” writes Roman Olearchyk, The Financial Times veteran correspondent in Ukraine. “In Kyiv’s district administrative court, some of the justices are the mafia, say anti-corruption investigators.”

Venedyktova was a controversial hire and replaced the widely respected Ruslan Riaboshapka, who was dubbed “Ukraine’s first ever honest general prosecutor.” Venedyktova is widely seen as loyal to Zelenskiy and among her first moves was the launching of an abuse of office investigation into former president Petro Poroshenko that is widely seen as politically motivated.

“Zelenskiy’s handpicked Prosecutor General Iryna Venedyktova discredits herself completely. She has now opened 39 cases against Poroshenko because Zelenskiy hates him, rather than going after Ukraine's real criminals. Ukraine needs the rule of law!” tweeted Anders Aslund, a Swedish economist and a Senior Fellow at the Atlantic Council.

Poroshenko had to defend himself in court on July 1 against abuse of office charges that nearly saw him jailed. The ex-president failed to show up at the State Bureau of Investigations and walked out of court after the charges were dropped.

In the most recent scandal more than 20 Western-sponsored civil society organisations signed a September 11 statement calling on Venedyktova to dismiss her recently appointed deputy, Maksym Yakubovskiy, as announced by the ZMINA centre for Human Rights.

“Yakubovskiy needs to be dismissed in order to ensure the independence of the departments in the Prosecutor General’s Office that he has been appointed to lead,” the statement said. “These are the departments to conduct EuroMaidan-related investigations, to combat the use of torture and to prosecute military crimes.” The statement also called for Venedyktova to voice public support for criminal cases involving the EuroMaidan crimes.

Venedyktova appointed Yakubovskiy as her deputy on September 10, the Prosecutor General’s Office announced that day. In 2011-2013, Yakubovskiy served as an expert of criminal law for the Constitutional State Independent Ukrainian centre for Legal Initiatives and Examinations, which is sponsored by Viktor Medvedchuk, widely recognised as Putin’s right-hand man in Ukraine. “The centre’s director is Vasyl Nimchenko, who is an MP with the pro-Russian Opposition Platform For Life Party, which was co-founded by Medvedchuk (also an MP). Among the centre’s key activities was discrediting the Ukraine-EU Association Agreement,” the statement said.

Yakubovskiy’s appointment “eliminates the independence of the prosecutors of the Prosecutor General’s Office as procedural directors in the EuroMaidan cases, as well as the possibility for an effective conclusion to investigating these cases and an appropriate presentation of accusations in court,” said the statement, whose signatures include the Anti-Corruption Action Centre and Transparency International Ukraine.

“Yakubovskiy’s appointment has made it apparent that Ukraine’s pro-Russian forces are laying the groundwork for Zelenskiy’s departure, which we view as having solid chances of occurring (better than 50/50) before his five-year term as president concludes. Gradually, they have been placing loyal officials in key positions through which they will be able to retake control of affairs in the event of his departure,” Zenon Zawada of Concorde Capital said in a note.

Likewise, a battle for control of the National Anti-Corruption Bureau of Ukraine (NABU) has recently broken out, with the Constitutional Court declaring illegal a 2015 presidential decree appointing Artem Sytnyk as the first director of NABU, a body set up to investigate corruption and entirely autonomous of the government. The legal assault on NABU was enough to prompt the IMF to issue a statement that implicitly warned Kyiv to back off or see further IMF money halted.

A judicial reform initiative launched last year that was backed by both the president and Parliament was blocked by the 20 members of the High Council of Justice, some of whom have been charged with corruption. Corrupt judges have been kept on and little effort has been made to oust them.

“Until reforms take place, this Council operates as a law unto itself and has unchecked authority to review laws as well as to discipline, replace and select judges in all courts. The blow was a setback to judicial reform while illustrating the need for sweeping changes,” said Diane Francis, a senior fellow at the Atlantic Council’s Eurasia Center, in a recent article.

During this summer, judges have escalated their attack on NABU as well as on the National Bank of Ukraine (NBU) as part of a campaign by oligarch Ihor Kolomoisky to regain control over PrivatBank, which was nationalised in 2016 after he looted $5.5bn from it.

The courts have also tried to liquidate the High Anti-Corruption Court, which is another leg of the triumvirate that includes the Special Anti-Corruption Prosecutor’s Office (SAPO), which carries out the prosecutions in parallel to the General Prosecutor’s Office, but is also entirely independent from the government’s control. The cases that NABU and SAPO produce are heard in the Anti-Corruption Court, which is also entirely independent of both the government and the rest of the legal system.

This whole independent graft-fighting system is under constant attack and Zelenskiy appears to have no interest in protecting it. As bne IntelliNews has written elsewhere, corruption is the system and Zelenskiy, like his predecessor Poroshenko, has shown little interest in attacking the issue.

There was more bad news for reformers in early September when the Kyiv Administrative District Court ordered PrivatBank to pay $350mn to two associates of Kolomoisky. PrivatBank lawyers said the bank would appeal against the decision.

The seriousness of this PrivatBank ruling cannot be overstated. In a social media post, Ukrainian Justice Minister Denis Malyuska branded it “one of the biggest judicial transgressions in Ukrainian history,” said Francis.

Meanwhile, former Finance Minister Alexander Danilyuk called the decision “the beginning of the collapse of the results of the nationalisation of PrivatBank” and warned that if lawsuits are not stopped, they could cost Ukraine’s government billions of dollars.

“These setbacks highlight the need for dramatic personnel changes within the court system. However, efforts to purge the Ukrainian legal system have repeatedly been undermined as jurists close ranks. In 2019 and 2020, NABU charged a number of judges with corruption and obstruction of justice, but have been unable to get a court to hear the case. Likewise, the Prosecutor General’s Office has tried but failed,” said Francis. “President Zelenskiy must take on the country’s legal cabal. Judicial reform legislation must be re-introduced and the support of the IMF, the West, donors and the public must be elicited. The courts cannot continue to veto reforms.”

Emerging Europe has a growing number of female politicians taking a stand against corruption and authoritarianism.

The female voice of change
16 hours ago
Russian government may cut borrowing this year by RUB0.5 - 1 trillion over US sanctions fears
4 days ago
Sanctions risk on Russia is over-priced
6 days ago
Forbes launches eco-rating of Russian companies
8 days ago
Kyrgyzstan: Kumtor’s fate uncertain once more
10 days ago