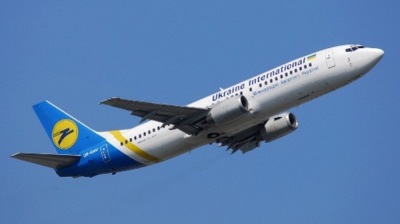 Ukraine’s Ministry of Infrastructure says it is willing to pay a reported $216mn of compensation to Ukraine International Airlines (UIA) that belongs to oligarch Ihor Kolomoisky for loses incurred because of a Russian overflight ban.

As part of a series of tit-for-tat sanctions, Ukrainian airlines have been banned from using Russian airspace. On the Kyiv-Astana route, for example, Ukrainian planes have to fly around Russia, adding over one and a half hours to the flight. Competitors like Astana Air can fly directly and consequently charge less for their tickets.

UIA lost over $100mn in 2018 partly as a result of the Russian ban and as reported by bne IntelliNews just replaced its president of 15 years Yuriy Miroshnikov with the deputy director of Boryspil Airport, Yevgeny Dykhne, who has helped to run UIA’s main hub for the last five years.

UIA board chairman Aaron Mayberg blamed UIA’s poor performance on aviation fuel taxes, VAT taxes on domestic flights, and Russia’s ban on overflights by Ukrainian airlines. However, he predicted UIA will return to profitability next year.

The government has conceded the Russian overflight ban has cost UIA, the national carrier, and agreed in principle to compensate it. The Minister of Infrastructure Vladislav Krykliy said the state is developing a mechanism for Ukrainian airlines to see financial redress, UNIAN reports .

“Indeed, we are leading and will offer some things about what should be compensated for [the Russian overflight ban]. But it does not have to be direct compensation. It can be provided through airport charges or another convenient model,” he said on September 12.

According to the minister, airlines are becoming uncompetitive because they are forced to fly around Russian territory and lose a lot of money. The minister added that UIA has lost the most money.

UIA is one of the many assets that belong to Kolomoisky, who is close to the new Ukrainian President Volodymyr Zelenskiy and financed his election campaign.

The nature of the relationship remains unclear and observers worry that Zelenskiy is nothing more than Kolomoisky’s placeman. Kolomoisky has also been lobbying the state for $2bn of compensation for the state’s decision to nationalise his PrivatBank in November 2016. At the time PrivatBank was the largest commercial bank in the country but as bne IntelliNews reported in a cover story Privat investigations the owners had stripped it of some $7bn worth of assets using fake loans made to shell companies controlled by them.

The PrivatBank case has become highly sensitive as the nationalisation of the bank was carried out partly at the behest of the International Monetary Fund (IMF). If compensation is paid to Kolomoisky for PrivatBank that could derail current talks with the IMF on a new Extended Fund Facility (EFF) worth $5bn.

Kolomoisky has also actively campaigned against the arrival of international budget carriers Ryanair and Wizz Air in Ukraine. Ryanair nearly pulled out of a deal to enter the Ukrainian market in July 2017 after deals it had agreed with major airports were reversed following an intense lobbying campaign.

Kolomoisky later threatened to sue Ryanair over airport slots and then did sue the infrastructure ministry to try and get it to reverse the Ryanair deal. Ryanair’s business has expanded rapidly since its launch, eating into UIA’s revenue and market share. Wizz Air has been even more successful with the number of flights doubling in 2018 and Ukraine accounted for a quarter of all its new routes in 2018.

Observers will be watching closely to see if the state pays out on either of these compensation claims by Kolomoisky, whose business model has largely targeted running businesses that seek rents from the state.