The Ukrainian finance ministry's plan to reduce external sovereign debt by $15.3bn by giving international bond holders a haircut is getting messy.

Institute of International Finance (IIF) executive director Hung Tran, which is not formally representing the private investors but has been in consultation with them, said too many entities are being exempted from a plan to reduce the amount the state and its companies owe, and therefore the burden is unfairly falling on a restricted group of private investors.

Ukraine owes a total of some $40bn to external creditors but only private investors, which own some 20% of the total, are being asked to take the haircut.

"Our observation is that the wider community of Ukrainian creditors — not just international private sector but also domestic and official sector creditors — should contribute," Tran said. "The burden should be shared."

The World Bank and IMF are owed $12bn and Russia another $3bn, but are not included in the finance ministry plan to cut the size of the debt.

Russia has excluded itself from the debt restructuring talks and made clear it expects to be paid in full when its debt matures in December, Russian Finance Minister Anton Siluanov said on March 16.

The IMF is also reluctant to accept a haircut as it just approved an additional $17.5bn emergency loan programme to prevent Ukraine from collapsing and has paid out the first tranche of just under $5bn.

The private investors are bristling at the international financial institutions, which they believe are dictating the outcome before the investors have had a chance to have their say.

"They have started the process of restructuring by specifying the sum rather than letting it be the end result of negotiations between creditors and Ukraine," Tran said, local media reported.

If the private investors dig their heels in then the whole programme may stall as Franklin Templeton, the single largest private holder of traded Ukrainian debt with $6.5bn, is in a position to block any restructuring proposals under majority voting procedures. The fund, which made a killing on buying huge amounts of Irish debt well ahead of a European Union bailout, has hired Blackrock's advisory group to represent it in the upcoming negotiations. Kyiv has hired the investment bank Lazard to face off against them, which comes to the fight fresh from representing the Greeks in their bailout talks.

A second problem is that if the goal of the restructuring was to keep within the parameters of the IMF's four-year plan, which calls for a reduction in the ratio of sovereign debt (plus guarantees to state-owned companies) to GDP to under 70% by the end of this year, then even the haircut being proposed will not achieve this goal, says the IIF.

Ukraine's debt is climbing rapidly. Having started the current phase of the crisis last year with a debt to GDP ratio of the order of 35%, it has already breached the 60% threshold set by the Russians in its bond covenant that allows Moscow to call in its debt at any time, and is on course to end the year at more than 100%. Indeed, the IIF estimates that Ukraine will have total debt of $128.9bn by the end of this year, or around 130% of GDP, putting the country on a par with debt-burdened Italy. Other economists put the end of year figure even higher.

"If the aim of [private sector involvement] is to get enough debt forgiveness from private investors to fund the programme, then talk of haircuts is completely irrelevant because you don't have enough principal maturing between now and 2018," Tran said, adding that excluding the Russian $3bn bond, only $9bn will mature between now and 2018.

The numbers do not up add up despite the IMF's total $40bn aid programme unless western governments and IFIs stump up another $24.7bn, according to the IMF's plan, which was leaked to the press on March 12. The IMF plans to provide $10bn to Ukraine in 2015 and $2.5bn in each of the years 2016-2018. Other donors are expected to to provide $6.3bn in 2015 and $1.0bn in the next year. But so far the other lenders have been extremely reluctant to lend anything to Ukraine, which has yet to get to grips with its corruption problems or bring an end to the armed conflict in the eastern regions.

But perhaps the IMF and Kyiv have miscalculated as the private investors are also in a position to refuse to cooperate. Private investors are disappointed as they were expecting a simple extension of maturities and not cuts in principal owed, like Russia imposed on its $40bn worth of bondholders in its financial meltdown in August 1998. While Russia technically defaulted on its debt it never touched the principal, only freezing the bonds for five years and placing the funds in special "S" accounts. As the Russian economy recovered over the next three years, foreign investors' access to these accounts was gradually eased as they were allowed to do more with this money. Many investors used their S account funds to buy fresh bonds and equities and eventually made back some of what they lost in the subsequent boom.

Analysts in Kyiv believe that the subject of extending maturities may come up again as one of the few options available to create enough cash to get through this year.

"At this stage, it’s clear that Ukraine will try to seek to extend the maturity of all its sovereign and guaranteed Eurobonds due in 2015-2018, including the $3bn Eurobond issued to the Russian State Welfare Fund and $0.5bn in state guaranteed debt of Naftogaz to Gazprombank," Alexander Paraschiy, an analyst with Concorde Capital said in a note on March 16. "All that debt totals $12.0bn, we estimate, so the core question is what else will be included in the total restructuring offer of $15.3bn."

Another option yet to be mentioned is to swap the existing debt for new instruments with longer maturities and lower interest rates. The government has said it wants to complete the talks on restructuring by June before the IMF next review of its lending agreement is due. 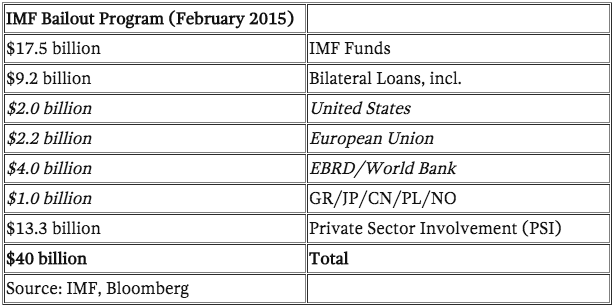