Ukraine reinforces its border security with Belarus amid increased provocations 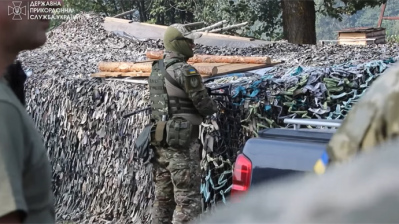 On September 1, the Deputy Chief of the Main Operational Department of the General Staff of the Armed Forces of Ukraine, Oleksii Hromov, told reporters that Belarus will hold command and staff exercises between September 8-14 on recapturing “lost territory.”

The exercises will focus on a transition from manoeuvrable defence to counter-offensive and retaking territories temporarily captured by the enemy. According to Hromov, Ukraine’s General Staff believes that these temporarily lost territories might in fact refer to the border areas of Volyn, Rivne and Zhytomyr Oblasts in Ukraine.

Hromov told reporters that Ukraine is ready for “any course of events.” According to Ukraine’s Border Guard Service the border fortifications on the Ukrainian-Belarusian border have been strengthened, and Ukrainian forces are keeping a close eye on Belarusian troop movements.

However, Hromov also told reporters that the threat of a new invasion from Belarusian territory remains low. Moreover, the exercise will be performed together with both Russia and other CSTO member countries. This means that Kazakhstani, Tajik, Kyrgyz and Armenian forces are also likely to participate, further decreasing the chance of Russia using the exercises to stage a new offensive in northern Ukraine.

In late August, Lukashenko continued his military provocations against both the West and Ukraine.

Furthermore, Lukashenko on August 26 told the public that Belarusian fighter jets had been refitted to be able to equip nuclear weapons. However, during his public speech he claimed that Belarus had refitted some of its “SU-24” aircrafts, which were withdrawn from service in 2012.

Regardless of Lukashenko’s confusion, some of Belarus’ SU-25 fighter jets are currently most likely capable of carrying nuclear weapons, at least technically. However, a few problems remain.

First, Belarusian pilots have little experience with practising how to use nuclear warheads and simply refitting aircraft won’t give the pilots the needed experience. Secondly, as bne IntelliNews previously reported, the Su-25 is designed as a close-support aircraft. This means that it would probably only be able to deliver nuclear warheads in free-fall mode, i.e., going downwards without engine power. While this would give it a similar role to Nato’s dual-capable aircraft, the survivability of the Su-25 would be much less than that of a Nato aircraft.

On September 1, Interfax cited Lukashenko saying that the only reasons Belarus would ask for Russia to locate nuclear weapons to Belarusian territory would be if Belarus was attacked or if American nuclear weapons were moved to Poland.

These threats, combined with the upcoming staff and command exercises possibly aimed at Ukraine, are causes for concern. However, as Hromov said, the risk of an invasion from Belarusian territory remains small and mostly consist of provocations aimed to draw Ukraine’s attention away from Russia’s attacks in the southern and eastern parts of the country.