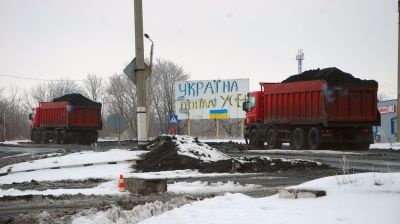 Until the recent transport blockade, deliveries of coking coal carried on between rebel-held areas of the Donbas and the rest of Ukraine. / Photo by CC
By bne IntelliNews March 3, 2017

Amid warnings that Moscow is turning Ukraine's eastern Donbas into a frozen conflict, rebels there have dealt a major blow to the country’s industrial capacity and budget revenues by seizing key enterprises belonging to oligarch Rinat Akhmetov.

On March 1, armed rebels took control of numerous enterprises in the Donbas, mainly of mining and steel company Metinvest, part of SCM Group, a conglomerate of companies controlled by Akhmetov. Some 200,000 subscribers of his Ukrtelecom mobile phone provider were also cut off after armed men took control of eastern offices of the network.

The self-proclaimed Donetsk People’s Republic (DPR) imposed “external management” on over 40 enterprises, “with some exceptions”, its head Alexander Zakharchenko said. Similar efforts were taken at Akhmetov-controlled enterprises in the neighbouring Luhansk People’s Republic (LPR) to control payment of their taxes, according to local officials.

SCM Group has rejected as “unacceptable” demands that it “re-register” its enterprises and pay its taxes locally. “SCM is one of few links between the government controlled areas and non-government controlled areas of Ukraine,” the company said. “Despite the challenging political situation in the country and the ongoing hostilities, all SCM Group companies pay taxes and duties in full to the Ukrainian budget.”

Since the armed conflict began in the region almost three years ago, Donbas-born Akhmetov has been able to continue his business activities across the demarcation line between the warring sides, mainly due to his political clout in Kyiv, his roots, and the extensive humanitarian aid he has provided in the conflict zone.

The seizure of his businesses follows a blockade in recent weeks of rail links to rebel-held territories by pro-Kyiv war veterans protesting against smuggling across the region. In response, rebel authorities threatened to take control of the enterprises if the blockade was not lifted.

Ukrainian President Petro Poroshenko called the expropriations a “brutal and dreadful” violation of international law, while concern is growing at the damage this can do to the national economy as it struggles to regain its feet.

Since the military conflict in the Donbas started in 2014, SCM has paid over UAH100bn (€3.5bn) in taxes to the national budget, of which 10% are attributable to the businesses in the rebel-held areas.

Poroshenko said the move took place against a background of recent steps to bring the eastern territories into “the [Russian] ruble zone”, as well gas and power supply systems from Russia, and the introduction of direct budget transfers.

“This is an absolutely clear confirmation of the fact of occupation of this territory by Russian troops along with full control over the state border in the uncontrolled area,” the president underlined. The actions will “definitely be punished” by Kyiv, and Ukraine will demand broader sanctions for those responsible for the seizure of Ukrainian enterprises in the Donetsk and Luhansk regions, he added.

Meanwhile, the rail blockade has led to acute shortages of anthracite coking coal, which accounts for one third of all electricity generated in the country. In mid-February, the Ukrainian government imposed temporary emergency measures in the national energy sector. Deputy Prime Minister Hennadiy Zubko said the government could impose rolling blackouts in several regions due to the shortages.

On March 2, the National Bank of Ukraine (NBU) said its decision to leave the key interest rate unchanged at 14% was partly due to inflation risks from the recent intensification in hostilities in Donbas and the transport blockade. If lasting for a prolonged period, these developments will lead to the ultimate disruption of production and supply chains and so to a reduction in steel and coke output, as well as mining and electricity production, according to the NBU.

There can also be a negative impact on the balance of payment, the regulator warned: “A possible contraction in metallurgical exports and higher coal imports could adversely affect the current account balance. Consequently, this will have negative implications for the interbank FX market,” and inflation expectations may worsen.

The seizure of Akhmetov’s enterprises came days after Russia caused outrage in Ukraine by granting temporary recognition to documents issued by rebel authorities in the east, in a move Moscow said was motivated by “humanitarian reasons”.

“For me, this is more proof of Russian occupation as well as Russian violation of international law,” Poroshenko said.

“This step completely negates the Minsk process,” added Oleksander Turchynov, secretary of Ukraine’s National Security and Defence Council, referring to the Minsk peace accords reached in the Belarusian capital in 2015 with German and French support.

According to an order issued by Russian President Vladimir Putin on February 18, Russia will temporarily recognise identity documents, diplomas, birth and marriage certificates and vehicle registration plates issued in the rebel-held regions.

Coming amid an upturn in violence on the demarcation line, the Russian move also drew criticism from the United States.

“Russian recognition of documents from separatist ‘republics’ [is] troubling and inconsistent with agreed goals of Minsk,” the US Embassy tweeted on February 19.

The Russian decision is a conscious step to creating a prolonged ‘frozen conflict’ like that in Moldova’s Transnistria, former Ukrainian president Leonid Kuchma warned.

“I think Russia took the decision long ago to create a frozen conflict in the post-Soviet area, similar to the one in Transnistria. The situation with the passports is a step in this direction,” Interfax quoted Kuchma, Kyiv’s envoy in the Trilateral Contact Group (Ukraine-Russia-OSCE) to resolve the conflict in Donbas, as saying on February 27.

The ex-president reminded that Ukraine is firmly maintaining its position that security issues must be resolved in the first place before political problems. “Russia sees it in another way, Europe is just looking for now,” noted Kuchma, who led his country from 1994 to 2005.