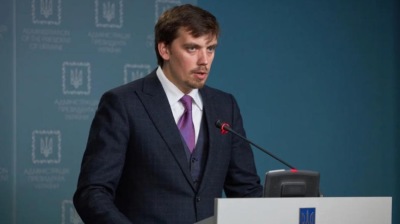 Zelenskiy has to submit the name of his proposed Prime Minister to the nation's parliament, the Verkhovna Rada, for approval. Following the landslide victory of hhis newly formed party, Servant of the People (SOTP), in the July general election the acceptance of Honcharuk to the job of the nation's PM should be a formality.

The draft decree is registered on the parliament website on August 29.

Honcharuk is seen as a liberal market-orientated reformer. Most recently he worked as the deputy head of Zelenskiy’s office overseeing economic development and reforms.

Honcharuk has a PhD in law and graduated from the National Academy of State Administration under the president of Ukraine. He spent his career as a lawyer, becoming lead partner in a firm specialising in real estate development. He also served as an adviser to Stepan Kubiv, the first deputy prime minister during the Petro Poroshenko administration.

Earlier this year, Ukrainian oligarch Ihor Kolomoisky, who is widely considered to be a mentor and a sponsor of Zelenskiy, named his own short list of top candidates for the nation's PM post. The businessman said that state-owned natural gas monopoly Naftogaz's executive director Yuriy Vitrenko and Honcharuk are the top two candidates.