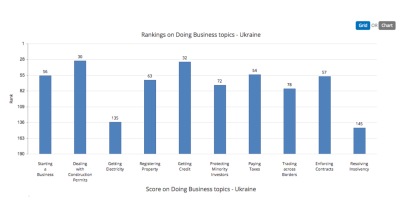 Ukraine climbed five spots in the World Bank's Doing Business ranking this year to 71
By Ben Aris in Berlin October 31, 2018

Ukraine climbed five spots in the World Bank's Doing Business ranking this year to 71 from a total of 190 countries surveyed, according to the World Bank report released on October 31.

"Ukraine has moved up five more spots in the Doing Business rating and took 71st place. Our figure in the 'trading across borders' section grew by 41 points and in the 'enforcing contracts' section by 25 points," President Petro Poroshenko wrote on his Facebook page after the results were released.

"Of course, we will not stop here. I know that we deserve a better place and we can do better," Poroshenko added.

Ukraine’s gain of five places was good news, but it remains a midlevel country and its “turn to the west” has yet to bear fruit. Following the Georgian “rose” revolution, the small Caucuses republic leap to the head of the ranking and was “most improved” country for several years.

Even Russia has latched onto the ranking as a benchmark to measure reform progress. In 2012 Russian President Vladimir Putin called on the government to improve Russia’s ranking from the then 120th place to somewhere in the top 20 by 2018. Russia also moved up this year but by only one place to 31, missing Putin’s target.

The ranking has been criticised by some observers, who argue that the benchmarks are simplistic and if a government wants to show progress it is simple to game the system. Nevertheless the Doing Business ranking is widely followed as rough guide to how a country is faring. Ukraine’s score underlines that after ignoring reforms for 20 years it has the bulk of the work ahead of it.

The Russian physicist and election statistics expert Sergey Shpilkin released another two charts on the voting patterns in the recent Duma elections that show a “comet effect” and a “Moscow blob”.

There was little change to the Watcom Shopping index that measures foot traffic in Moscow’s biggest malls in real time.

Russia’s Duma elections statistics: the comet effect and the Moscow blob
2 hours ago
Romania and Latvia's car ownership rates among lowest in Europe
3 hours ago
Bank lending in Romania gradually returns to retail-driven pre-crisis pattern
4 hours ago
Ukraine's industrial output increases 0.6% in August
19 hours ago
Little change to Watcom shopping index in September as things get back to normal
1 day ago