Ukraine international reserves increase by $1.3bn in October to $25bn 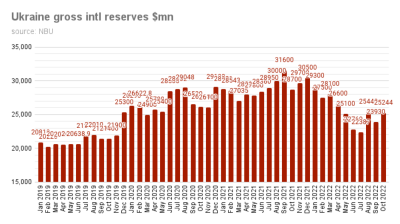 Ukraine's international reserves increased by $1.315bn, or 5.5%, in October bringing the total to $25.2bn, UBN reported on November 9.

Cut off from the international capital markets and facing economic hardship caused not only by the war but also by the polycrisis that has hit the global economy, Ukraine has been struggling to maintain sufficient reserves to ensure the stability of the national currency and the functioning of the economy.

The National Bank of Ukraine (NBU) has reportedly spent some $20bn this year supporting the currency, much of it funded by grants and loans from Ukraine’s international partners.

In September Ukraine’s partners increased their commitment to support Kyiv financially next year, with both the US and the EU separately committing to $18bn of funding each. The government has been running a deficit of $5bn a month that has largely been met by printing cash, but the new international financial aid package goes a long way to covering the anticipated $38bn deficit expected in 2023.

Reserves increased in October due to steady inflows from international partners as this support package begins to arrive. The promise of more money has also shored up the hryvnia and has led to a decrease in the net sale of currency by the NBU.

The NBU has sharply improved its international reserves forecast for the end of the year by $5.2bn to $26bn, which is well over the requisite three months of import cover. At the same time, the forecast for 2023 predicts that reserves will decrease to $21.7bn.

Financial support for Ukraine is not uniform amongst the EU members. Hungary has refused to contribute to the EU’s €18bn macro-assistance package of funding in the New Year, according to comments by the Minister of Foreign Affairs of Hungary, Peter Szijjártó.

"We are ready to continue financial support based on a bilateral agreement between Ukraine and Hungary, but we will not support any joint borrowing by the EU," the minister said, as cited by UBN.

Szijjártó‘s statement was made after the head of the European Commission, Ursula von der Leyen, announced the financial assistance programme for Ukraine in 2023.

Szijjártó recalled that Hungary financially supported Ukraine through joint borrowing during the coronavirus (COVID-19) pandemic. He said that Hungary has spent hundreds of millions of euros to help Ukraine, which he believes is enough.

Hungary has been trying to strike a middle path between condemning Russia’s invasion of Ukraine, but at the same time maintaining cordial relations with Moscow, on which it is heavily dependent for energy.