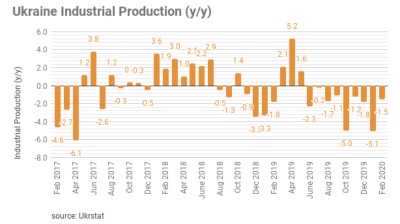 The data was probably out of date even before it was released, as the coronavirus (COVID-19) infections in Ukraine is accelerating and the government is starting to enforce social distancing on the population. However, the data shows the economy was already slowing before the outbreak began.

“February’s slowdown in industrial decline would be an encouraging development if [it were] not for the severe lockdown measures introduced by the government at the end of the previous week in its attempt to counteract the spread of coronavirus infection throughout Ukraine,” Evgeniya Akhtyrko of Concorde Capital said in a note. “It’s already obvious that every day of the lockdown has an extremely negative effect on economic activity, including the looming threat of a complete shutdown of industrial enterprises.”

We are observing the current developments, both in the global and domestic economies, in order to formulate our vision on Ukraine’s industrial development in 2020.