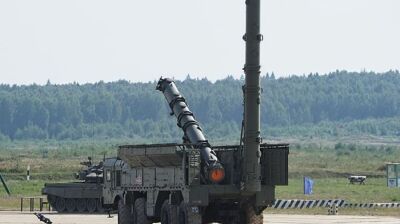 Ukraine was assessing the damage from Russia’s country-wide missile attack that hit a dozen cities on the morning of October 10, targeting both power stations and residential spaces.

Rockets rained down on Ukraine as residents began to wake up, sending the population scuttling for bomb shelters and the metro. Given the scale of the attack casualties were mercifully light. According to the latest data from the State Emergency Service of Ukraine, 14 people were killed and 97 injured as a result of the strikes. As the sun set on the same day 1,307 settlements were left without light due to blackouts.

Russia fired a total of 84 missiles into Ukraine worth between $400mn and $700mn, according to Forbes, of which 43 were shot down by air defence systems, the Ukrainian Defence Ministry said.

The country's Air Force clarified that the attack was carried out by Russian strategic aviation forces (X-101 and X-555 missiles), Kalibr cruise missiles from ships of the Black Sea Fleet, Iskander ballistic missiles and S-300 air defence missiles, as well as Tornado- C" and drones, The Bell reports The Russian Defence Ministry reported that the goal of the strike had been achieved, and all designated targets had been hit.

While the parks and residential blocks targeted got the most press, Russia also hit a number of power stations that had been avoided until now, just as the days shorten and temperatures start to fall.

In Kyiv, the main power plant CHPP-5 was damaged, as well as the headquarters of Ukraine’s security service (SBU) in the city centre, and the 101 Tower office block, which houses the offices of law enforcement agencies of Ukraine. One of the rockets hit Shevchenko Park, one of the most popular places for walking in the centre of Kyiv.

Power plants in Lvov, Krivoy Rog, and the Bursztynski thermal power plant (TPP) in the Ivano-Frankivsk region were all also damaged. High-voltage substations were also reportedly targeted. There were reports of power cuts (and therefore water supply) in other large cities, including Poltava, Khmelnytsky, Ternopil, Lutsk, Rivne, Kharkiv and Odesa.

Due to power outages, there were significant interruptions to the internet throughout the country. Key communications infrastructure has also been hit, such as the Ukrtelecom Monitoring Centre in Dnipro.

Around noon, Prime Minister of Ukraine Denys Shmyhal announced damage to 11 important infrastructure facilities in eight regions of the country and Kyiv, and urged people "to be prepared for temporary interruptions in electricity, water supply, and communications,” reports The Bell.

In the evening of the same day, the Ukrainian authorities reported more shelling of cities. There were explosions in the Cherkasy region, in Krivoy Rog, at a military training ground in the Odesa region. Two rockets were shot down in the Kremenchug region.

Ukrainian President Volodymyr Zelenskiy recorded an appeal from the centre of Kyiv, accusing Russia of hitting energy facilities and targeting the population. He urged people to stay in the shelters and called for an urgent G7 meeting, which is supposed to take place on October 11.

In Russia Vladimir Putin, speaking at a meeting with the permanent members of the Security Council, officially admitted that Russian troops had carried out strikes on the Ukrainian sides. The targets, according to him, were energy, military command and communications facilities of Ukraine. Putin said that the strikes were a response to the attacks of the Kyiv regime, which "by its actions actually put itself on the same level as international terrorist groups." Putin accused Kyiv of attacking the Kursk nuclear power plant (NPP) three times and of trying to undermine Russia’s TurkStream gas pipeline.

Former president and deputy head of the Security Council Dmitry Medvedev called today's attacks on Ukraine "the first episode" and promised others. He also personally spoke out in favour of "the complete dismantling of the political regime of Ukraine", since "the Ukrainian state in its current configuration with the Nazi political regime will pose a constant, direct and clear threat to Russia."

In the West, US and European leaders have unanimously condemned the attacks on Ukrainian cities and declared their unwavering support for Ukraine, but Kyiv is looking for more than just words of support. Zelenskiy repeated calls for more air defence weapons to protect against Russian rockets.

Running out of rockets

The rocket attack on October 10 was the largest onslaught since the Kremlin switched to Phase 2 of its military operation and concentrated its forces in the south-east of the country. However, with production of arms stymied by sanctions on technology imports, Russia cannot sustain such large-scale attacks for any length of time.

At the start of the conflict in February Russia had about 7,000 medium and short-range missiles, Ukrainian Forbes reports as cited by The Bell. By mid-August, Russian troops had used up more than half of their stockpile (3,650 missiles, averaging 22 per day), Reuters reported.

This is almost as much as Russia is capable of producing in a month: Maxim Starchak, a military expert at the Centre for European Political Analysis (CEPA), calculated in June that Russia could produce 8-10 Kalibers, 3-6 Iskander-K missiles per month, 5 Iskander-M missiles. And this is without taking into account the lack of qualified personnel and sanctions, due to which it has become impossible to import microelectronics necessary for missiles.

Since August, the intensity and frequency of rocket attacks have decreased, which may indicate that Russia has begun to save missiles, saving the rest in case of a war with Nato, war journalist Sebastien Roblin noted as cited by The Bell. At the same time, Ukrainian air defences have become more and more effective, he adds.

According to the calculations of the Ministry of Defence of Ukraine, by the end of August, Russia had no more than 45% of the missiles that it had in February. The situation is especially difficult with the Iskanders (there are about 20% of them left) and the Daggers (“Kinzhal”, the aviation version of the Iskander) number only 30-40 pieces left, the department believes.

Ukrainian Forbes wrote in July that Russia, due to a lack of modern missiles, is resorting to the use of old Soviet Kh-22s. They are inaccurate, so it is almost impossible to avoid accidental victims when using such weapons, the publication noted. Modern Kaliber, Iskander and Daggers were used at the beginning of the "special operation".

The falling stock of missiles and the lack of parts means Russia can only afford sporadic massive strikes aimed more at achieving a psychological effect but cannot sustain protracted shelling campaigns. It can be expected that the Russian Armed Forces will fire dozens of missiles every few months, experts believe.