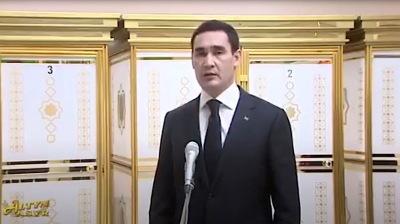 The son of the president, Serdar Berdimukhamedov, won a landslide presidential election to replace his father / wiki
By bne IntelliNews March 14, 2022

While there were eight candidates on the ballot only one had a photo – Serdar. There is little doubt as to who will be the winner of the election when the final tally is announced.

The election was in form only and a symbolic process that will see the reins of power handed over from the 65 leader to his 40-year-old son Serdar. There were no international observers of the election which was not considered to be free and fair by anyone.

None of the other eight registered contenders, seen as token candidates, are expected to pose any real opposition to his procession to the presidency.

Serdar’s ascendancy to power is set to mark the first successful dynastic transfer of power in Central Asia.

Little is known about Serdar, who rarely speaks in public. He has issued an election manifesto, published by the Neutral Turkmenistan newspaper, but it is filled with little more than mechanical pledges on developing democracy and civil society.

However, he surprised observers by giving a short press conference after polls closed where he answered question from international journalists and answered in English – the first time he has revealed this skill.

Prior to the February announcement of the snap election, Berdimukhamedov tasked Serdar with overseeing the country’s economy, which was in a parlous state for years even before things got worse with the advent of the COVID-19 pandemic. In recent years Serdar has been groomed for the role of president and has been assigned a number of jobs in various branches of government to gain experience.

The president, who has ruled for 15 years, bears the honorific title of Arkadag (“Protector”) and may well continue to exercise much power from behind the scenes even after Serdar wins the so-called election, in November last year placed his son in charge of the country's oil and gas sector.

Turkmen foreign-based opposition-run website Chronicles of Turkmenistan described Serdar, who ran Ahal province at the time, as behaving akin to a despot-in-waiting. “His favourite expression when talking to subordinates was ‘I will wring your neck,’” the dissident publication quoted one source as saying.

Eurasianet’s Akhal-Teke Turkmenistan Bulletin has accessed Serdar’s campaign pledges and concluded: “… Berdymukhamedov junior’s delusions and rhetoric are so unerringly similar to those of his father that it is difficult to describe what is occurring as a transition in any real sense.”

PANNIER: At Shanghai Cooperation Organisation summit, watch the action on the sidelines

Turkmenistan: Thank you for your service deferral

Kyrgyzstan, Uzbekistan warn citizens not to sign up to fight for Russia in Ukraine
PANNIER: At Shanghai Cooperation Organisation summit, watch the action on the sidelines
Turkmenistan: Thank you for your service deferral