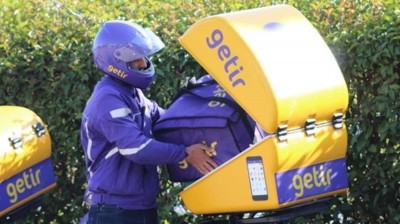 Getir aims to be a billion-dollar company within one year.
By Akin Nazli in Belgrade February 10, 2020

Turkish rapid delivery groceries start-up Getir (“Bring”) is in talks to raise at least $100mn of additional funding as it plans to expand into the UK and South America, co-founder Nazmi Salur has told Bloomberg.

Istanbul-based Getir has raised a total of $70mn since it was established in 2015.

It currently operates in the Turkish cities of Istanbul, Ankara, Bursa, Izmir and Izmit and it initially plans to expand into London, Sao Paulo, Paris and Mexico City.

Last month, Spain-based on-demand delivery start-up Glovo announced that it was exiting Turkey, Egypt, Puerto Rico and Uruguay as part of its drive to hit profitability by 2021. Glovo launched its Turkey operations as recently as 2018. Last year, the company served more than 500,000 customers in Turkey’s three largest provinces, Istanbul, Ankara and Izmir.

Glovo did not explain exactly why it decided to end its Turkey operations.

Delivery services is a lucrative business in Turkey.

Back in 2015, Delivery Hero bought Yemeksepeti for nearly $590mn.

Turkey’s digital fast-moving consumer goods market accounts for 0.3% of the country’s total FMCG market of around $100bn, according to Salur.

Ukraine’s real wages up over 10% in October but have been stagnant in dollar terms for almost a year
BEYOND THE BOSPORUS: Turkish number crunchers deliver November inflation surprise of 14%
Iran calls on Saudis to limit $67bn defence spending to Tehran’s $10bn