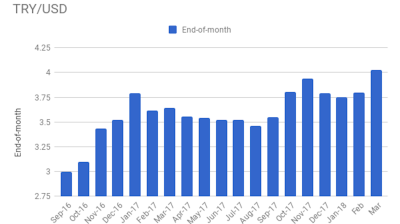 The Turkish lira (TRY) came under renewed pressure on April 4. It weakened for a fourth day against the dollar, suffering the worst losses among emerging market currencies while nearing an all-time low.

A combination of domestic concerns over sticky inflation and economic imbalances and international market anxiety over a potential US-China trade war weighed on the currency sending it at one point up by almost 1pp to TRY4.0265 against the dollar before a recovery brought a rate of 4.0008 by 1900 Istanbul time. The all-time low to date is the 4.0361 seen on March 23, with the TRY having lost around 6% against the greenback since the start of the year, pushing it past the psychologically important threshold of 4.0. April 4 also saw the yield on Turkey’s 10-year notes move up +12bps to 12.71%, the highest recorded since March 29.

The lira is partly under pressure because Turkish inflation stayed in the double digits for the eighth month in March, while the fact that Turkey has one of the world’s worst current account deficits is unsettling investors. On March 14, Capital Economics issued a report warning that the sheer pace of growth in Turkey—even outstripping the growth rates posted by India and China—looks increasingly like a cause for concern and there is mounting evidence that the economy is overheating.

Some analysts are urging the central bank to tighten policy when it meets on April 25, with Morgan Stanley saying that it believes the “trigger level” for the regulator to make a move would be around 4.05. But Turkish President Recep Tayyip Erdogan made a series of speeches at the weekend during which he berated defenders of high interest rates, describing them as the source of “every evil in an economy”. Advocates for keeping rates high would answer to him, he added. The president has insisted that the Turkish economy will this year defy the critics, staying on the rails with strong and healthy growth. Speculation is rife that he will call early parliamentary and presidential elections to coincide with a time when the economy is still humming.

In his speechmaking, Erdogan also persisted in pushing his unorthodox monetary theory, saying: “The interest rate is both the mother and the father of the inflation.” Taking Erdogan’s latest rhetoric into account, Timothy Ash, an analyst at BlueBay Asset Management, said in a note to investors: “Erdogan made it pretty clear over the weekend that higher interest rates were off the table for the CBRT [Central Bank of the Republic of Turkey].”

Turkey’s Daily Sabah newspaper reported on April 4 that the Turkish government will announce a new economic package in two weeks, citing unidentified officials. The package would reportedly aim to get inflation down to single digits, achieve a “strong decline” in interest rates and bring in administrative measures including expanding the policy of using a single Treasury account for various state institutions.

The newspaper added that the government wants to cut borrowing and officials were set to take measures against food inflation.

Bloomberg reported Istanbul-based economist Ercan Erguzel as saying that he expected another 30bps fall in core CPI in April, while a further decline in the remainder of the second quarter of this year was unlikely. If the lira continues to weaken, the central bank “can use more effective FX liquidity measures before considering a rate hike such as adjusting RRRs and/or accepting rediscount loan repayments in TRY instead of FX for a specific period”, Erguzel was quoted as saying.

The latest inflation data showed on April 3 that annual consumer price inflation remained stubbornly stuck in the double digits, coming in at 10.23% in March.

The central bank has in the past year used several unorthodox measures to fight against the depreciation of the lira and high inflation. On March 31, the bank released the calendar for Turkish lira-settled forward FX sale auctions during the second quarter.