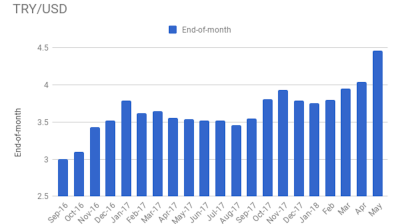 The Turkish lira (TRY) took another hammering on May 15, and fell to a further record low, after Turkey’s President Recep Tayyip Erdogan told Bloomberg TV in London that he planned to tighten his grip on the economy and assume a greater role in setting monetary policy if he is kept in power by the June 24 snap election.

For months prior to the interview, investors were already anxious that the Turkish central bank was failing to respond to Turkey’s economic woes, such as double-digit inflation and an overheating economy, with a sufficient dose of monetary tightening given the continuous pressure for cheaper money coming from Erdogan.

Soon after the morning interview, Saxo Bank said the market would punish Erdogan’s comments. It saw the TRY falling to 4.50 against the dollar, with the Turkish central bank's credibility at stake.

Given approved constitutional changes, if he wins the coming presidential election Erdogan—who today completes a three-day trip to the UK—will become an executive president with sweeping powers, while the position of prime minister will be abolished and parliament will have a much reduced role. Erdogan, who has long claimed in the face of conventional wisdom that the particular economic needs of Turkey mean that rather than interest rate hikes the economy needs lower rates to drive investment and create jobs, told Bloomberg’s Guy Johnson in a televised interview that the Central Bank of the Republic of Turkey (CBRT), while independent, would not be able to ignore signals from the new executive presidency.

“I will take the responsibility as the indisputable head of the executive in respect of the steps to be taken and decisions on these issues,” Erdogan stated.

Erdogan has claimed that the weakness of the lira does not reflect the true state of Turkey's economy. It outstripped the Chinese economy last year by growing at 7.4%, but analysts are concerned the credit-fuelled expansion, which has sucked in imports, is coming off the rails. Signs of major conglomerates struggling to pay their hard currency-denominated debts have set off alarm bells.

The TRY trimmed some of its losses on May 15 after one of Erdogan’s advisers, Cemil Ertem, said the central bank had the independence to use all the tools at its disposal and told Reuters: “President Erdogan’s emphasis is not directed towards [the CBRT’s next policy meeting on] June 7. What the president says is that interest rates should be reduced as a target.”

The news agency quoted Dietmar Hornung, an associate managing director and head of European Sovereigns at ratings agency Moody’s, as saying at a conference in London: “Centralisation of power and interference in the monetary policy is a concern to us.”

Forex regime changes denied
On May 14, the Turkish Treasury denied media reports that it was planning foreign-exchange regime changes, even though parliament was preparing to empower authorities to demand access to foreign currency transaction data. The Treasury stated that submitted draft legislation to tighten protection of the TRY signalled a step forward for "a more liberal exchange regime".

Lawmakers who have started debating the bill dropped an article making reference to the “exchange regime”, and cancelled a proposed amendment that would allow authorities to impose fines for submitting misleading information, except in cases of state security, trade secrets or family privacy, Bloomberg reported.

On May 8, Erdogan said the government has projects in motion designed to “reverse the assaults on the economy that are fully carried out through the exchange rates”. Two months earlier, he launched an attack on credit rating agencies two days after Moody’s Investor Service cut Turkey further into junk after concluding that its government seems focused on short-term measures, undermining effective monetary policy and economic reform. Erdogan claimed the rating agencies were preoccupied with trying to drive Turkey into a corner and financial markets should not take them seriously. Banks, he said must not bend to the will of the international “interest rates lobby”.

Global strengthening in USD and rising yields on the US government bonds continued to weigh on emerging currencies on May 15, but better inflation data has lowered pressure on the Fed to raise interest rates.

Markets have long been worried over whether the central bank has what it takes amid political pressure to fight Turkey’s stubborn double-digit inflation. The early elections called for June 24 have generated added uncertainty for market players.

The lengthy list of reasons for the TRY’s sharp decline this year include the appreciation of the dollar, with the 10-year US Treasury yield breaking above the psychologically important level of 3%; S&P’s surprise move on May 1 to cut Turkey further into junk on the growing risk of its overheating economy experiencing a hard landing; the ballooning current account deficit; pre-election fiscal expansionary policies; latest PMI data on manufacturing pointing to contraction and signs of corporate debt difficulties that could leave the country’s banks exposed to burdensome problem loans.

Geopolitical risks, rising oil prices and the ongoing emergency rule in the country, which has lasted 22 months to date and will apply during the elections, are also negative when it comes to the lira’s performance.