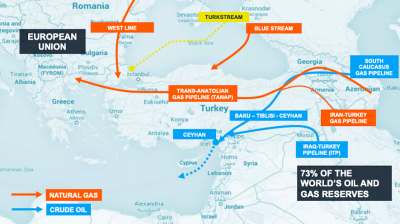 Oil-indexed prices in Turkey’s natural gas import contracts are on track to increase considerably in Q2 compared to Q1, encouraging the country’s state-run pipeline operator Botas to front-load its take in 2021, Argus reported on February 12.

Botas holds a supply contract for an annual 6.6bn cubic metres (bcm) from Azerbaijan’s Shah Deniz first development phase (Shah Deniz I), which lapses in April, and another deal for 6bcm from the second development stage (Shah Deniz II) via the TANAP pipeline.

The three trillion cubic-metre Shah Deniz I field began production in 2006 and has delivered more than 10bcm a year of gas to Azerbaijan, Georgia and Turkey.

BP has a 29% stake in Shah Deniz. The other partners are Azerbaijan’s national oil company SOCAR, Turkey’s TPAO, Malaysia’s Petronas and Russia’s Lukoil.

In January, we reported that the renewal of the first Azerbaijani contract was seen as unlikely as Turkey already has the TANAP contract.

Turkey has liquefied natural gas (LNG) and TurkStream alternatives too.

Other gas contracts totalling 4bcm that Botas transferred to the private sector in 2007 are also set to expire over the course of 2021.

A 2.1bcm LNG contract with Qatar expired in September.

The overall volume of oil-indexed long-term natural gas contracts that will expire in 2021 totals 15.9bcm. Turkey has 58bcm of such contracts in total.

The cost of Azerbaijani gas from Shah Deniz I is expected to be around $194 per 1,000 cubic metres in Q2, above the $180 seen in Q1, according to Argus' assessment of Turkey's long-term contract prices.

Oil prices are reflected in the prices in Turkey’s oil-indexed natural gas contracts with six to nine-month time lags.

In Q2 2020, Turkey turned to LNG imports to benefit from the oil price collapse that came with the coronavirus crisis impacts. It returned to pipeline supplies after the Q2 oil prices entered into the pipeline contract prices after end-June.

Russia has already provided a 40% gas price discount for Bulgaria via TurkStream while Serbia will pay around $155 for gas at the Bulgarian border, down from $240.

Turkey’s gas imports via TANAP have risen to about 1bcm to date in 2021. They were already higher than the 941mn recorded in Q1 2020, Turkish energy minister Fatih Donmez’s suggested in comments on February 11.

It was in January 2020 that TurkStream, which reaches Turkey via a Black Sea Route from Russia, came online. The project has a total annual capacity of 31.5 bcm.

The first line, with a capacity of 15.75 bcm, supplies gas to Turkey, and the second line, with the same capacity, goes further afield to Bulgaria and beyond in Europe, including Greece, North Macedonia, Romania, Serbia, Bosnia and Herzegovina.

Russia now supplies gas to Turkey via both the TurkStream and the Blue Stream, which also goes undersea to traverse the Black Sea. They have a total capacity of 32 bcm per year.

Azerbaijan presently plans to build up to 10 bcm of supplied gas a year to European markets, including 8 bcm to Italy and 1 bcm each to Greece and Bulgaria.

Also in January 2021, Gazprom delivered gas to Serbia and Bosnia via TurkStream, which has an annual capacity of 31.5bcm.

Russia is also working on building up its Nord Stream pipelines to Europe to an overall capacity of 110bcm. Nord Stream II will have a 55bcm capacity, but its construction has been held up by sanctions imposed by the US, which claims it amounts to a bad deal for Europe given the European need not to be over-reliant on Russia for its energy supplies. It will complement the already operational 55bcm Nord Stream I.

The key trends in the global market are a production decline in Europe and consumption growth in China.

Europe each year consumes about 500bcm of gas.

Exports to Turkey, its fourth largest market, were down 6% y/y to 16bcm.

“Securing a long-term deal will not be as easy as the one signed in 2001 because now Ankara has a larger range of suppliers to choose from. Turkey is emerging as a more adept gas consumer and negotiator,” Zamaninia has said.

Talks were supposed to be launched in 2020 but were postponed due to the coronavirus crisis.

Given the nature of long-term international agreements, such talks are normally interconnected with foreign policy issues and geopolitical considerations, according to Zamaninia.

Turkish gas imports from Russia slumped by more than a third last year to 16bcm in 2019. In January-November, they declined further by 1% y/y.

Imports from Azerbaijan were up 21% y/y in January-November.

In the LNG category, Algeria was the largest supplier with 5bcm in January-November 2020 (6bcm in 2019), while Qatar rose to second place with 3bn.

Turkey’s energy watchdog also hiked electricity prices by 6% for all types of consumers.

In July, Botas cut natural gas prices for industry and power plants by between 9.7% and 12.5% after natural gas plants were troubled by long-term gas supply contracts and the fall in electricity prices amid the pandemic.

Electricity production at natural gas plants fell to 1,537GWh, or 8% of Turkey’s total production, in April before rising to 8,293, or 32%, in November.