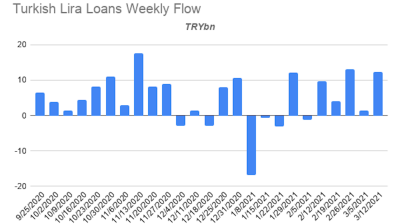 Problem loans recorded as under close monitoring at Turkish banks have reached Turkish lira (TRY) 387.5bn ($51bn) while there is an additional TRY151.6bn of non-performing loans (NPLs), Turkey’s finance minister Lutfi Elvan said on March 16 during a televised interview.

The Turkish authorities do not provide actual data sets on problem loans, loans taken out under the state’s Credit Guarantee Fund (KGF) or restructured loans.

Some Borsa Istanbul-listed banks, however, provide figures on their problem loan burdens.

In December, the BDDK extended  through June regulatory forbearance measures that allow Turkey's banks to record a loan as an NPL after a 180-day payment delay rather than a 90-day delay.

Also, the banks are instructed to keep using the central bank’s average FX buying rate across the last 252 days when calculating their capital adequacy ratios.

Turkish banks are now traded below their book values.

Transparency and data reliability are the main reasons that make Garanti the most popular Istanbul-listed lender among foreign investors.

Observers, meanwhile, try, by rule-of-thumb, to identify the banking industry’s problem loan figures in the graph provided by the central bank in its quarterly financial stability report.

The report does not provide numbers on problem loans but it does state numbers when it comes to the KGF. Accordingly, the outstanding loan volume under the KGF stood at TRY343bn at end-September.

Elvan has just recently turned to discussing the problem loan data, following his appointment on November 10. However, Elvan, fulsomely praised by the markets for being "orthodox" in his economics until the time came to sell emerging market currencies, is, just like his predecessor, known for his excursive talk.

For instance, he stated, during his interview on March 16, “at the moment” when referring to the data timeframe he provided on problem loans.

Banking watchdog BDDK provides data on the Turkish banking industry in daily, weekly and monthly releases. The daily data series come out with a lag of three working days.

According to BDDK data, Turkish banks’ NPLs stood at the minister's "TRY151.6bn" as of end-January. So, taking it as a time reference is useful for comparison.

When the same methodology is applied to the figures that the minister provided on December 10 during his budget speech in parliament, we have the option of concluding that the overall problem loans ratio rose to 15.2% at end-January from 15% at end-September.

On March 16, Elvan also provided some ratios for the figures he relayed, but they were somewhat “rough”. It is not possible to pinpoint them along the time line. BloombergHT did not include the ratios in its story, instead just taking the lira figures.

In a finance ministry official website post, it was written that the interview took place on March 12.

In Turkey, there is no scarcity of moustachioed jacklegs and pawn brokers who provide FX financing at the highest cost in the world. Their prevalence also serves as a useful measure of the country's economic mire.