They are a familiar sight on every Turkish high street: the lottery ticket sellers with their peaked caps and trestle tables covered in brightly coloured "Millipiyango" lottery tickets have been a fixture since the state lottery was first started way back in 1939. But they could become a thing of the past if government plans to privatize the lottery by the end of January come to fruition, with private sector operators widely expected to ditch the traditional ticket sellers in favour of more modern marketing strategies.

After lengthy speculation, a formal notice advertising the sale was finally published on November 26. It detailed the sale of a ten-year license to operate all six of Millipiyango's games for an annual fee of 25% of gaming income and 28% of income from related sales activities.

However, in a change from previous announcements, non-Turkish companies will apparently be allowed to bid, subject to their meeting existing legislation on foreign investment. Whether that will result in greater interest in the sale, though, is debatable.

A previous attempt at selling the lottery in 2007 saw only five groups pre-qualify for the tender.

Of these, three were non-Turkish companies or consortia. OPAP - the Greek national lottery - was itself only recently privatised, while another Greek company, Intralot, has extensive gambling operations in the Greek half of Cyprus, which in the light of recent tensions could complicate its attempts to invest in similar operations in Turkey. This only leaves Austrian lottery group Ãsterreichische Lotterien Gesellschaft as having no obvious reason not to renew its interest in Millipiyango.

Of the other two interested parties in the previous attempted sale, the joint venture between Turkey's Dogan media group and Italy's Lottomatica withdrew its interest after the former was hit with a multi-billion-dollar tax bill, while the final applicant was a consortium led by Turkey's biggest mobile phone operator Turkcell, a company which following a boardroom meltdown has for the past six months been under direct state control.

Only one of three bids actually received matched the government's $1.622bn reserve price for the lottery, causing the sale to be cancelled.

Thus analysts are left scratching their heads over just whom the government expects to bid this time around.

That the lottery is profitable is not in doubt. Last year saw post-tax profits reach TRY1.879bn (€691m), up from TRY1.47bn reported in 2008. That's a 27% increase in lira terms, but it takes no account of the 45% price inflation in Turkey over the five years to 2013 or the 28% depreciation in the lira against the euro over the same period.

Analysts concur that revenues could easily be increased with more modern marketing and sales techniques. However, there are questions over whether the lottery's new owners will be encouraged to increase sales or even allowed to do so unimpeded.

The first news of the impending sale came earlier in November from Turkish Prime Minister Tayyip Erdogan, who chose to bill it as the end of "the era of state involvement in gambling." This description may appeal to Turkey's more hard line Islamists in the coming election cycle of local, general and presidential elections scheduled over the next 18 months. However, it may also serve to make the sale less appealing to potential buyers who will be looking to increase sales rather than bow to religious mores.

According to Inan Demir, chief economist at Turkey's Finansbank, a successful sale of Millipiyango may give the government some much needed cash to fund pre-election spending, but only if the sale actually goes ahead. "It's far from clear if there will be sufficient interest and anyway, the financing issue will be important," he says, pointing out that the challenging global financing environment has resulted in a number of Turkish privatization sales failing after the winning bidders were unable to raise capital to complete their purchases.

Power to the highest bidder

Following the successful sales of three major thermal power plants earlier this year, the end of November saw the Privatization Authority (OIB) launch sales for four more all coal-fired plants: the 630-megawatt (MW) Kemerkoy plant, the 630MW Yatagan plant, the 420MW Yenikoy plant and the 300MW Catalagzi plant - all of which are expected to be completed by the middle of 2014. A further four state-owned thermal plants totalling just under 2,000MW have been transferred to the OIB for eventual sale.

Other candidates for quick sales are more difficult to identify, however. "Following the success of the Emlak Konut [secondary share offering], they could be persuaded to go for another public offering," says Demir, referring to the recent successful offering of a 26% stake in Turkey's state-owned real estate development company.

That sale was indeed successful, being oversubscribed by 2.3-times and raising a cool $1.6bn, making it the third biggest offering in Europe this year.

One candidate for a share sale might be national carrier Turkish airlines in which the state still holds a 49% stake. The company has gone through a remarkable transformation over the past decade and a half, from unsellable basket case to one of Europe's most successful carriers, recording a profit of $625m this year. However the recent weakness of the Turkish lira coupled with increased competition from budget operators such as Turkey's Pegasus have this year hit profits, meaning now might not be the best time for a sale.

Timing is also a factor that will affect the sales of the most valuable of Turkey's state companies, the three state banks Ziraat, Halk and Vakif, which have reportedly attracted interest from major Gulf-based banking groups. "In terms of infrastructure, Vakifbank is most ready of the three, but I'm not sure a sale could happen at [the previously high] multiples," says Demir. "Sentiment for banking stocks in Turkey should turn more favourable before the government decides to offer them." 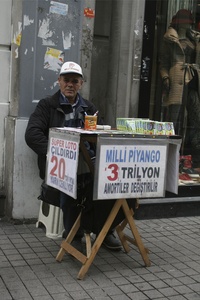