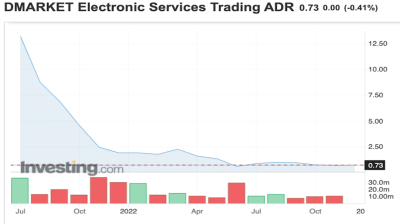 Spot the nosedive. / Investing.com
By Akin Nazli in Belgrade December 10, 2022

Turkey's e-commerce platform Hepsiburada (Nasdaq/HEPS) has agreed to pay a total of $14mn in compensation to investors who filed two lawsuits against the company, its board members and senior management, the underwriters of its initial public offering (IPO) and the selling shareholder TurkCommerce B.V., Hepsiburada informed the market in a filing with the securities exchange commission (SEC).

TurkCommerce, majority-owned by an investment fund managed by US asset manager Franklin Templeton (New York/BEN), will contribute $4mn to the payment. The deal is subject to the approval of the courts.

In September 2021, Canada-based IWA-Forest Industry Pension Plan filed a lawsuit (case no: 1:21-cv-08634-PKC) as the lead plaintiff at the US District Court for the Southern District of New York.

The Turkish competition board, meanwhile, has been conducting investigations into Turkish retailers including Hepsiburada.

Turkey's Dogan family controls a 65.4% stake in the company and TurkCommerce controls 14.6%.

The European Bank for Reconstruction and Development (EBRD) and the International Finance Corporation (IFC) also have stakes in Hepsiburada via TurkCommerce, but they have not released exact figures on their holdings.

Following the IPO, Hepsiburada chair Hanzade Dogan Boyner became a billionaire, but that status did not last long.

Hepsiburada’s share price has nosedived since its IPO. The company has always been lossmaking and does not anticipate paying dividends.

On December 9, Emre Ekmekci, head of the Turkish Association of E-Commerce Operators (ETID), said that Turkey’s e-commerce volume was expected to reach TRY 700bn ($38bn) in 2022.

In the country's currently fragmented e-commerce market, Trendyol, launched in 2010 and serving as the Turkish unit of China's Alibaba (New York/BABA; Hong Kong/9988) since 2018, is the market leader with a market share standing at about 30%.

In July 2022, eBay (Nasdaq/EBAY) shut down its Turkish unit GittiGidiyor. It was launched in 2001, served as eBay's Turkish unit from 2011 and accounted for a market share of around 4%.

Amazon (Nasdaq/AMZN) entered the Turkish market in 2018 and remains a relatively small player, compared to rivals. Morhipo, founded in 2011 by Boyner Group, has a similar status.

Kick Turkey out of Nato? Members will start considering it warns ex-commander

Employees claim Bulgarian Facebook moderators controlled by Russia
2 days ago
EWDN: A year in review – How Ukrainian tech resisted the war in 2022
4 days ago
Pictures of Serbian President Vucic isolated at Davos go viral on social media
7 days ago
Russia to slash AI development support
8 days ago
Romania’s Digitail raises €11mn to scale up software for vet clinics
14 days ago