Turkey’s mega airport ‘looking to refinance up to €5bn’ 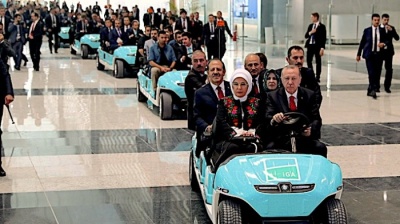 Turkish President Recep Tayyip Erdogan in the front vehicle takes the wheel during the official opening of Istanbul Airport just over a year ago.
By bne IntelliNews November 6, 2019

IGA, the operator of Turkey’s one-year-old mega international airport, is reportedly seeking to refinance up to €5bn ($5.6bn) in loans it used to construct the facility.

A mandate awarded to London-based Dome Group is aimed at cutting the financing costs of the airport project, IGA said in a statement cited by Reuters on November 5.

The airport—which since April has replaced Istanbul Ataturk airport as Turkey’s main international flight hub following a rapid construction process that resulted in the deaths of scores of workers and an unknown number of people killed by allegedly speeding trucks carrying building materials—has got off to a less than auspicious start. Officials are ambitious to develop it until it reaches the status of “world’s largest airport”, but it is experiencing substantial teething problems.

The problems are such that national flag carrier Turkish Airlines, which transferred its operations HQ and Istanbul flights from Ataturk to Istanbul Airport, endured a summer during which its share price dropped, while that of low-coster Pegasus, which uses Istanbul’s relatively small Sabiha Gokcen Airport as its main hub, rose. Istanbul Airport, thought to have cost up to $12bn after a big overspend, is located on the foggy Black Sea coast and local reports have shown it struggling against far too many diverted flights, delays and long runway taxi times. Pursued as a grand infrastructure project ostentatiously backed by Turkish strongman leader Recep Tayyip Erdogan, the airport was in April described by travel expert and consultant Ben Schlappig as “breathtaking” but one of the most poorly designed in the world.

“Risk structure not the same”

“The project’s risk structure is not the same as that in the construction period anymore. We’re talking about a very serious economic value,” IGA was also cited as saying in its statement, while declining to give an amount for the refinancing efforts.

In February, chairman of airport shareholder Limak Holding said the mega airport was not in need of additional financing and there was no plan to make flagship carrier Turkish Airlines a partner in the consortium that has built it.

The construction of Istanbul Airport began in May 2015 and according to a Bianet report that coincided with its official opening in October 2018 officials and executives were working to a target of having all phases online by 2023, a year which brings the 100th anniversary of the foundation of the Republic of Turkey. Perhaps by then, say critics, a decent level of public transport connections to the airport, located 20 miles outside of Turkey’s business and cultural capital, will be laid on.

A source close to the refinancing matter told Reuters that Dome would start talks with banks in coming weeks. “In this meeting, it will obtain participants for the syndication,” the source was quoted as saying, adding that it is expected to have a low interest rate. “A syndication that will give IGA significant breathing room is expected.”

IGA took out a €4.5-bn loan for the airport project with a 16-year maturity and a four-year grace period on the principal. Total investment in the project was predicted to be €6bn. IGA later borrowed another billion euros for additional financing.

IGA now consists of Kalyon, Cengiz, Mapa and Limak construction companies. Kolin, which was previously involved, transferred its shares to the other partners earlier this year.

Ziraat Bank, Halkbank, Vakifbank, Denizbank, Garanti BBVA and Finansbank were among the lenders that gave the loan.