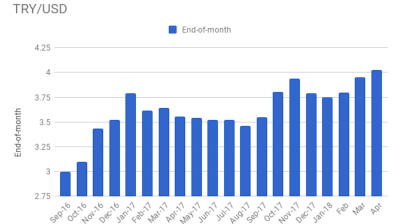 The parliamentary and presidential elections, previously scheduled for November 2019, are landmark polls as they will usher in the executive presidency narrowly voted for by the electorate in the April 2017 constitutional referendum. Under the system the position of prime minister will be abolished and parliament’s role will be much diminished to create a presidential republic instead of a parliamentary one.

Explaining his decision to go for early elections, as recommended by the ruling Justice and Development Party’s (AKP’s) junior ally, the nationalist MHP, on April 17, Erdogan said in a speech broadcast live on television that it was necessary for “Turkey to overcome uncertainties as soon as possible amid developments of historical importance in our region as well as the cross-border operation we’re carrying out [against Kurdish militia] in Syria”.

Erdogan also said: “Even though the president and government are working in unison, the diseases of the old system confront us at every step we take… Developments in Syria and elsewhere have made it urgent to switch to the new executive system to allow us to take steps for our country’s future in a stronger way.”

The president has always been known to many analysts as a leader who hates early elections as they dominated the country’s earlier turbulent decades of weak governments. “Erdogan sees early elections as somehow dishonourable,” Fadi Hakura, who manages the Turkey Project at Chatham House told bne IntelliNews on March 30. “He has traditionally viewed early elections as a sign of weakness and indecision—a failure of politics. And one thing Erdogan likes to do is to project strength and determination.”

Given that reading of Erdogan’s usual preferences in calling an election, cynics immediately focused on the difficulties the government would have had in keeping the economy humming right up until the originally planned date for the elections at the end of 2019.

Another factor in Erdogan's sudden liking for a surprise election, say the critics, might be found in an announcement on April 18 that the centre to centre-right Iyi (Good) Party, founded just months ago by a big rival of the president, former interior minister and high-profile politician Meral Aksener, will be barred from running in the parliamentary contest. Bloomberg quoted an unnamed official as saying a change would be needed in the legal system to allow such a young party as Iyi to run.

Aksener, who split from the MHP, which her party was expected to draw votes from, is intending to stand for president. Pro-Erdogan newspaper Daily Sabah late on April 18 quoted Aksener as vowing that her party would be on the parliamentary ballot. She also announced on her Twitter account that she will contest the presidency, having secured 100,000 signatures that back her candidacy.

Faster than China, but overheating?
Turkey may be growing at a faster pace than China or India, recording as it did a debt-fuelled GDP expansion of 7.4% in 2017, but all the signs are that the “warp-speed” economy is overheating and may come off the rails. Amid double-digit inflation and a surging current account deficit, a sinking Turkish lira (TRY) and Erdogan’s strictures on why the country should defy orthodox thinking by resisting interest rate hikes—leading observers to question whether the central bank de facto still has monetary independence—anxiety has built that the good times may soon no longer roll. Turkish conglomerates are presently renegotiating debt they are struggling to pay, Moody’s Investors Service has warned that Turkey’s banks are growing more exposed to problem loans, while the Turkish stock and bond markets have shown signs of stress.

Markets, seemingly assessing that a freshly elected government will have the mandate to effectively deal with the evolving economic malaise, were lifted by the announcement of early elections, first called for by MHP leader Devlet Bahceli.

“The market is loving it, as I think most people assumed that the macro would not hold out until scheduled elections in November 2019,” said Timothy Ash, an analyst at BlueBay Asset Management. “By going early he [Erdogan] reduces the period of uncertainty in Turkey, and I guess the hope is that a new government in place by late June can better address some of the big challenges facing Turkey.”

Turkey’s dollar-denominated bonds gained across curve on the election news with longer-dated issues adding around 1 cent. Longer-dated maturities took the biggest gains, with the 2045 bond registering its most extensive daily gain in two months. It was trading at 98.852 cents, Tradeweb data showed.

The BIST-100 benchmark index of the Istanbul stock exchange gained 3.08% to 112,099 on April 18, having been flat until the afternoon election announcement.

State of emergency hangs over elections
Turkey looks set to hold the elections amid its state of emergency, with the national security council having on April 18 recommended to parliament that the special regime, brought in following the July 2016 coup, is still required for the governance of the country and should be extended for a seventh time. Later on April 18, lawmakers voted to extend the emergency regime. After the election date was confirmed, Turkey’s main opposition party, the Republican People’s Party (CHP), demanded an immediate end to the state of emergency.

“The state of emergency needs to be lifted immediately, there cannot be an election under emergency rule. The country needs to brought out of the emergency rule regime starting today,” CHP spokesman Bulent Tezcan said.

The broad crackdown permitted by the emergency powers has polarised Turkish society. Opponents of Erdogan claim he took advantage of the plot he alleges was behind the attempted coup to consolidate his power.

Under the state of emergency, the president is entitled to rule by decree. Wide-ranging purges have have led to the imprisonment of tens of thousands of people, including journalists—Turkey is now known as the world’s biggest jailer of journalists. Tens of thousands have also been dismissed from their state jobs in the judiciary, civil service, police, military, media and academia. Observers say not all those caught in the crackdown can be described as in any way linked to the Gulenist network dissidents that the government blames for the attempted putsch. Dissidents of many stripes have been taken out of action, they point out. Brussels has frowned on Turkey’s treatment of basic human rights in the past two years and the country’s chances of joining the European Union are in tatters.

It was MHP leader Bahceli who in 2002 precipitated the snap elections that brought the Islamic-based AKP to power. The secular opposition has failed to dislodge it ever since. MHP has a formal alliance with AKP which, under new laws which were adopted after a brawl in parliament, mean it will obtain representation in parliament even if it fails to cross the 10% threshold when the votes are counted.