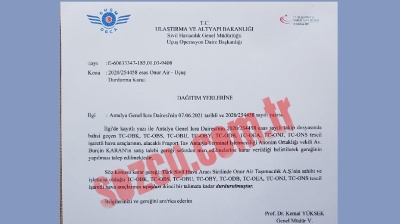 The coronavirus and now a court of bailiffs have knocked the no-frills airline out of the sky.
By Akin Nazli in Belgrade June 24, 2021

Turkish low-cost carrier Onur Air was on June 7 ordered to cease flying its eight aircraft by the Antalya court of bailiffs following a request made by the Antalya Airport operator TAV-Fraport, a JV between Turkey’s TAV (TAVHL) and Germany’s Fraport, Sozcu newspaper reported on June 23.

In March last year, Onur Air entered into a suspension of its flights due to the coronavirus (COVID-19) pandemic. Company sources quoted by the daily claimed that Onur Air owes €526,000 to Tav-Fraport, while Tav-Fraport holds a letter of guarantee for €500,000 written by Onur Air. The sources complained that the eight aircraft, worth €145mn, were thus subject to a foreclosure at just €26,000. However, Tav-Fraport denied the information about the letter of guarantee in an official statement.

Also in an official statement, Onur Air reiterated that the details about the letter of guarantee were correct and added that it paid €14mn to Tav-Fraport in 2019.

In February, BloombergHT reported that airlines in Turkey were still awaiting a promised TRY20bn in financial support from the government, while Corendon Air and Onur Air had entirely and indefinitely ceased domestic flights.

Founded in 1992, Onur Air was the first private airline to start domestic flights after the liberalisation of domestic air transport in Turkey.

Back in 2013, Cankut Bagana, the owner of the airline, sold the carrier for $250mn to Iranian billionaire Babak Zanjani. He was sentenced to death in Iran for corruption in 2016. In 2015, Bagana bought back Onur Air for around $105mn.

It is not clear when the website text was written, but it adds that Onur Air has carried 16mn passengers since 2011.